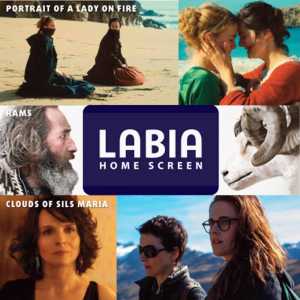 Labia Home Screen is great news for fans of The Labia Theatre in Cape Town. The much-loved cinema is launching an online streaming platform on 1 July, 2020.

The cinema temporarily closed on Monday 23 March due to the coronavirus pandemic and has remained closed for three months in adherence to the national lockdown.

“Labia Home Screen has been born out of the lockdown,” explains Ludi Kraus who with wife Ann runs the well known art movie theatre in Cape Town.

“We’ve been at home since March without any income and thought about what we could do to earn an income. We had several patrons asking us, so we thought that a streaming service would make sense. We investigated it and finally got it together.”

Films will cost R60 and will be available for up to six hours.

Labia Home Screen is available to viewers in South Africa, which means you can now enjoy quality film entertainment in the comfort of your home.

France 2019, 120 mins, 16SN
Winner of 2 Awards at Cannes.
Winner of 2 European Film Awards.
Winner Top 5 Foreign Language Films of 2019.
Set on an island in Brittany, this is the story of a forbidden affair between an aristocrat and a painter commissioned to paint her portrait.

France/Germany/Switzerland 2014, 124 mins, 16LN
Screened in competition at Cannes.
Winner of the César Award for Best Supporting Actress.
Juliette Binoche and Kristen Stewart in a multi-layered and entertaining European drama shot in English.
A veteran actress comes face-to-face with an uncomfortable reflection of herself when she agrees to take part in a revival of the play that launched her career.

Australia 2013, 113 mins, 13LVN
Mia Wasikowska and Adam Driver in an incredible true story based on Robin Davidson’s memoir and directed by John Curran.
Accompanied only by her faithful dog and four camels, a young Australian woman satisfies her craving for solitude by embarking on a solo trip across the desert from Alice Springs to the Indian Ocean.

France/Germany 2016, 130 mins, 18S SV NVL
Winner of the Golden Globe for Best Foreign Language Film.
Winner Best Film & Actress at Cannes.
In this provocative thriller directed by Paul Verhoeven, a successful business-woman (Isabelle Huppert) gets caught up in a thrilling game of cat and mouse, as she tracks down the identity of the masked assailant who raped her in her home.

Poland/France/UK 2018, 90 mins, 16SNL
Winner of the Palme d’Or at Cannes for Best Director.
Winner of 9 European Film Awards (including Best Film).
Nominated for 3 Academy Awards (including Best Foreign Language Film).
Sumptuously shot in luminous black and white, and set against the background of the Cold War in the 1950s, an impossible romance in impossible times, as a singer and a piano player fall deeply, obsessively and destructively in love.