The Nubian Music Festival usually happens at the Hartbeespoort Dam in early summer, but now goes online with a livestream from Sun City on 29 August, 2020, from 3pm.

Bonang Matheba, who has just come off SABC1, A Very Bonang Year, will host the event. 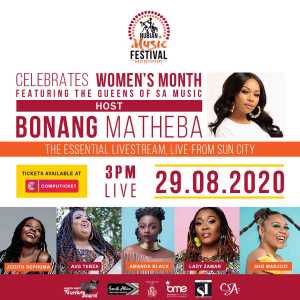 Palace of the Lost City

The Nubian Music Festival Celebrating Women’s Month in 2020 will be a livestream is presented by North-West Province with The Palace of the Lost City at Sun City as the setting.

The Nubian Music Festival Celebrating Women’s Month tickets can be bought online at Computicket, at Shoprite and Checkers stores across South Africa. Telkom subscribers and customers can purchase tickets direct with their phone numbers and Telkom accounts via Telkom’s livestream platform OAS1SONE and Rockstar Television on Telkom Plus (www.TelkomPlus.co.za).

If fans can’t make the livestream itself (3pm onwards, on 29 August), tickets can also be purchased on OASISONE and RockstarTV’s platform on www.TelkomPlus.co.za or www.RockstarTelevision.com for on-demand streaming of either the entire show or chosen artists for 48 hours after the live show ends.