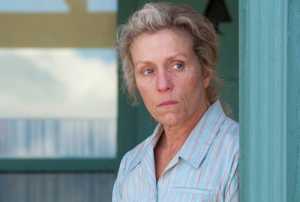 It’s not that I didn’t know before that Frances McDormand is probably the best actor in the world, it’s just that as Olive Kitteridge she just completely solidifies this indisputable fact.

I arrived at Olive Kitteridge almost seven years late; it came out in 2014. I think I had been resisting it because it had been described as irredeemably bleak. Well, it matched my mood this week and I became completely engrossed in the minutiae of this unusual, very moving, and even at times mundane four-part mini-series.

Olive Kitteridge is a schoolteacher who is arbitrarily kind and extremely understanding to some people, and quite hideous to others, including but not limited to her husband and son. The four episodes span her life from her son’s childhood through to her husband’s death and beyond, and I don’t know how the stylists made everybody so young and then so old. Incredible.

Set in a small town in Maine, this heart-breaking story centres around a mostly unlikeable and unreachable woman who is so strange and absorbing, and I don’t even know why. Frances McDormand is probably the reason, and Richard Jenkins who plays her husband Henry, too. He is amazing.

Olive’s mood swings are horrible and result in terrible cruelty. It is a portrait of a deeply repressed woman who is entirely unable to express herself, and yet still manages to feel things so deeply. Frances McDormand is not kind to her character. She moves with a sharpness and brutality. Her words blast out of her. And so do her burps. She says everything she thinks and feels out loud, wounding her husband and her son and blaming them for her dissatisfaction. It is relentless. There were times when I thought, ‘why am I watching this?’, but it is compulsive viewing, and the performances are really that good.

This is not blockbuster TV. This is deep and meaningful on steroids. This is so fiercely independent I kept on imagining how the producers convinced HBO to make it. The audience for this work must be very niche. And there is resides on Showmax, giving me hope that one day my own seriously weird stuff will be made. Go Olive.