TANKISO LIVE: THE AUDACITY TO BE. With Tankiso Mamabolo. Baxter. 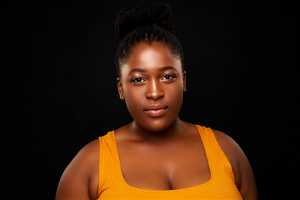 Tankiso Mamabolo, the eponymous star of Tankiso Live: The Audacity To Be, began her show without introduction. She launched into a series of songs, all self-composed (bar one). Her slightly husky voice was controlled, and her demeanour contained, for the first few numbers. There were no smiles to endear herself to the audience, she just sang like she meant it. When she was joined by Sizwesandile Mnisi and Nos’milo Gusha, her backup singers, they were similarly unpretentious. Their harmonies were flawless: perfectly blended and sensitively placed. Even when these singers were off stage, they swayed in unison in the dark.

Mamabolo places herself firmly within the struggle, saying “music is [her] form of protest”. Her work addresses everything from her family history to the ambivalence of women’s month to remembering the slain of Marikana. The slideshow that accompanied the concert flipped through images of great black women, baby pictures, and family snapshots, resting for a few moments on an image of Mambush, mouth open as if he was joining her in song. Her music spans a range of genres – some songs sound like they should be performed in a smoky barroom while others are clearly mourning. Then there are more dancey numbers in which she seemed to occupy the whole stage using the minutest of magnetic movements. 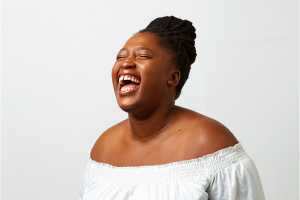 It’s clear that Mamabolo is interested in doing “something productive” with her pain, and she told tender stories of familial love and loss without becoming sentimental. Her sense of humour is equal parts charm and infectious self-confidence, à la Lizzo (speaking of her dance moves, she said “I’m not great for a fat girl, I’m great ‘cause the good Lord blessed me with rhythm and funk”). She sang in English and isiXhosa, sometimes just accompanied by the keyboard, sometimes by a full band. I felt that her voice could have been a little louder in the mix when she was with the latter.

Mamabolo’s sound is firmly anchored in the South African context with influences from a long line of local stars, from Miriam Makeba to Busi Mhlongo to Simphiwe Dana. Nevertheless, Mamabolo’s style could easily hold its own in the international market. I was reminded repeatedly of Adele, in terms of tone and phrasing (Mamabolo’s lyrics “they say freedom hurts sometimes” echo the formulation in “Someone Like You”). I hope Mamabolo blesses us with some recorded singles soon.

The only song she didn’t write herself, “Sunshine”, showed off an Aretha-Franklin-like side to her tone. Mamabolo uses classic songwriting techniques (like changing key up a semi-tone to maintain the energy) and has mastered the art of the pop chorus, making them simple and catchy enough that the audience can sing along the second time round. 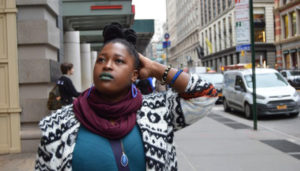 The all-male band was a really tight unit and clearly as smitten with Mamabolo as the audience was. Tyrone Marinus, on guitar, performed a series of chest-tightening solos as well as occasional maskandi-style parts. Bassist Franco Mannel was similarly excellent, especially in the songs with reggae and ska influences. Likewise, the band would have been much poorer without Marcell Adams’s contribution which, though reserved, added another dimension to the sound as only brass can. Yvan Potts, on keys, was the dream accompanist, providing a musical context for Mamabolo’s singing without taking over. On drums and cajon, Keith du Bruyn kept the whole outfit on track, and alternated easily between the two instruments.

Mamabolo said that “the first form of protest for women is to live out very loudly”, and she sings what she preaches. Her ability to rouse an audience is real: the crowd joined in call and response without her having to ask, and there was a standing ovation midway through the performance. As a matter of course, everybody was dancing by the end. Tankiso Live was an enormously enjoyable and compelling show, much enriched by the band’s great energy and the soulful contribution of the backup singers. Mamabolo balanced the very sobering elements with syncopated grooves that necessitated shoulder wiggling. It’s no wonder this sold out last year: you can catch it this year from until 17 August at the Baxter Theatre.