Abrahamse and Meyer Productions will present a brand of “order in” theatre for the Covid-19 age, starting with Chekhov’s one-act comedy The Bear. 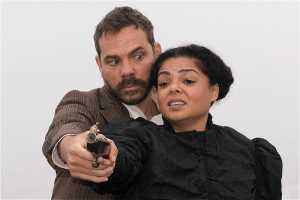 The concept of “order in” theatre is as simple as ordering a Mr. Delivery meal. Abrahamse & Meyer Productions will bring live theatre into the sanitised safety of patrons’ homes. This affords patrons to get the full experience of live theatre without the stress and strain of going into a public space where large groups of people are gathered.

In keeping with the company’s manifesto of presenting world-class classic theatre, Abrahamse and Meyer will be launching their brand of “order in” theatre with a new production of Anton Chekhov’s hilarious 1888 one-act comedy The Bear.

Chekhov’s superb comic genius is on full display in The Bear. This compact one-act vaudeville is a tour-de-force for two actors who play a pair of larger than life characters engaged in an hilarious battle of the sexes.

The production will be available for performances from 15 December and bookings can be made by emailing fred@amproductions.co.za

Where and when: Online from 15 December 2020 from fred@amproductions.co.za