Three Identical Strangers on Showmax is an award-winning documentary about three siblings – who didn’t know each other existed. 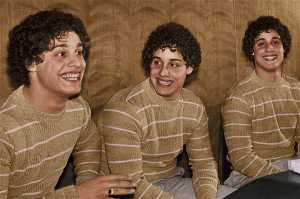 When 19-year-old freshman Robert ‘Bobby’ Shafran walked into Sullivan Community College in upstate New York on his first day in 1980, he had no idea why everyone was calling him Eddy, or that his life was about to change irrevocably.

Bobby had always known he was adopted. What he hadn’t known was that he had a double walking around. Not just someone who sort of looked like him, but an almost identical copy. An earth-shattering phone call and a two-hour drive at breakneck speed later, he was standing outside the home of Edward Galland, a complete stranger with whom he shared a birth date and, he was about to discover, a whole lot more. “As I reach out to knock on the door, it opens,” Bobby says in the movie. “And there I am. His eyes are my eyes; my eyes are his eyes.”

The remarkable feel-good reunion story of the twins separated at birth made headlines across the US. But another shocker awaited the two boys. It arrived with a phone call a day later. A young man named David Kellman had seen the boys’ picture in the papers, and he too was the spitting image of them. They were identical triplets.

The similarities between them, from their mannerisms and tastes to their identical smiles, were uncanny, but it was the differences between them that had governed – and would continue to impact – their fate.

How did this happen?

It was only after their emotional reunion that the boys and their families started asking questions. Their quest to find out why they hadn’t known about one another, and why they’d been split in the first place, revealed an increasingly bizarre and sinister mystery and, as Rotten Tomatoes put it, “a secret with radical repercussions for us all.” 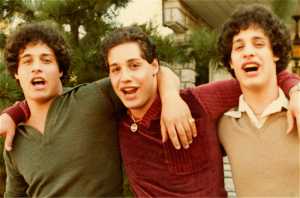 At once heart-warming, tragic and disturbing, the documentary has captivated audiences and critics alike. Newsday calls Three Identical Strangers, “A riveting, stranger-than-fiction documentary that plays out like a mystery novel,” while Times (UK) says, “It never loses sight of the three scarred subjects at the core of the tale, and of the sense of profound injustice inflicted on blameless children. Unmissable.”

Three Identical Strangers won the Special Jury Prize for Documentary Storytelling at the 2018 Sundance Film Festival and has collected a further 11 wins, including a Critics’ Choice Documentary Award. The documentary received another 53 nominations, including three Emmys and a BAFTA, and was the most-watched CNN Film premiere ever. Rotten Tomatoes’ critics rating puts it at 97%, listing it at #3 of the Best Documentaries of 2018, and #9 of the Best Limited-Release Movies of 2018. A feature film based on the documentary is already in development.

What: Three Identical Strangers on Showmax