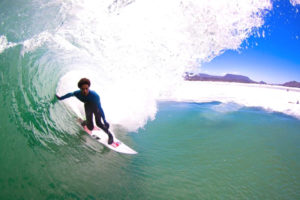 The short films, made in collaboration with Sledgehammer Studio, were made to assure potential tourists – specifically adventure tourists/surfers – that despite undergoing one of the worst droughts in history, Cape Town is very much open for business. Or, in this case, waves.

Wesgro CEO Tim Harris explains that when the threat of Day Zero loomed, it had a very definite effect on tourism figures in the Western Cape. Wesgro is the official Tourism, Trade & Investment Promotion Agency for Cape Town and the Western Cape, and were very obviously concerned (as was most of the Western Cape hospitality sector).

Now that the crisis has abated, due to both good rains and even better water-saving action by Capetonians, Wesgro felt it was time to reassure tourists that they could, and should, come and visit. One of the target groups identified was the adventure tourist – because they often have a more conscious environmental awareness, and because their natural habitat is usually natural habitat. Harris explained that the message of their ads was not to focus on rains and dam levels – because these are variable – but on the success of Capetonians in becoming water-wise.

Each video features an internationally acclaimed local surfer explaining their personal relationship with water, and how the recent drought affected not only them, but the province as a whole. The message across all three videos is a clear call to action: Cape Town and the Western Cape is a leading destination for responsible tourism, and adventure tourism, with some of the best surfing conditions on the planet, and is open for business. Our beaches and our breaks are still pumping.

Frank Solomon, Mikey February and Jordy Smith are all pro South African surfers: Solomon is known for his big wave exploits (and the award-winning surf film Let’s Be Frank), Smith is the highest-ranked South African on the World Surf League (WSL) circuit, with February joining the same circuit this year and doing pretty well for himself.

All three are global sports names, with big support on social media and through their various sponsorships. And all three gave up their time for free, to film the Wesgro ads which promote their beautiful hometown – and celebrate the result of conscious water-saving.

Filmed in recognisable spots – Llandudno, the Sea Point promenade, Muizenberg – the short films are high on energy, big on eye-candy and crystal clear on point. Does Cape Town have water? “Yeah, we do!”

Expect an influx of visiting surfers to hit Cape Town – because, as they say, #ItsAllStillHere