Across the way from the bustling taxi and bus station in Nyanga East is a multi-purpose centre, one of many scattered around Cape Town. In the weeks ahead the jubilant shouts from the basketball court and the strained grunts from weightlifters in the gym will be accompanied by the sounds of actors warming up and the applause of audiences. The cacophony of hooting, commuter bustle and the yells from taxi gaatjies provide the aural backdrop to music, theatre and dance until 8 October as Zolani Centre hosts the Cape Town Fringe.

Not a comfortable experience, but a necessary one 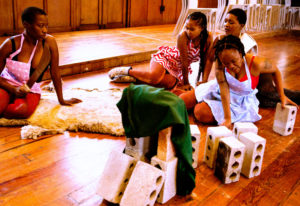 The programme opened on 21 September with a visceral punch from Mamela Nyamza’s Rock to the Core. Performed by the multidisciplinary cast of Chuma Sopotela, Zikhona Jacobs, Indalo Stofile and Buhlebezwe Siwani the piece, which won’t fit neatly in to any genre, had its genesis in a protest staged outside the annual Fleur Du Cap Award ceremony in March this year. The protest against the marginalisation of black actors, producers and directors and the overwhelming whiteness of stages at the main theatres in Cape Town has evolved in to a performance which is harrowing and thought provoking. Watching four young black women teetering on stilettos with knives between clenched teeth, later brandishing pangas as they speak truth to power is not a comfortable experience, but a necessary one. Rock to the Core evokes an acute somatic response, vacillating from concern for the safety of the performers to a despairing awe at the physical and psychological risks that their performances on this stage and in the industry demand. The production is the embodiment of the quote by Mexican writer Cesar A. Cruz borne on banners at the venue “Art should comfort the disturbed and disturb the comfortable.”

Mhlanguli George and Thami Mbongo told me what was special about the centre. “Zolani Centre is one of the most amazing performance spaces which is under-utilised in Cape Town. The infrastructure is there and with the assistance from the Cape Town Fringe Office the venue has been truly transformed. The programming in the venue is a really great mixture of well known artists and companies, and emerging artists and companies. The programme is curated by young and vibrant theatre-makers and producers who are passionate about theatre.”

The multi-talented pair are directors, producers, writers and actors in their own right and have known each other for a number of years. This is the debut outing for their collaborative company. I asked them how it came about. “We have done some work together in the past and that is where the idea of working together under one umbrella, Izityhilelo Theatre came from. We have spent a great deal of time together creating strategies for Izityhilelo Theatre and strengthening the other work that we do outside Izityhilelo Theatre.” 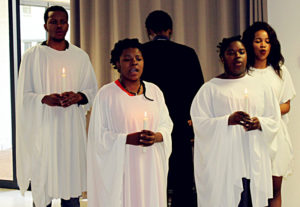 They explained the meaning and purpose of the newly formed company. “Izityhilelo means Revelation. It is a registered theatre company where we will both share the skills and knowledge that we have learnt over these years in the industry. It will be looking at producing new and old work, curating festivals and competitions and most importantly looking at business in the arts. We are very excited that the Cape Town Fringe has offered the company the platform to be part of this year’s festival. This is the beginning of a great partnership with the Cape Town Fringe and the National Arts Festival. The company will be looking at collaborations with different companies, institutions, government departments and the business sector.”

Multi-purpose, much on offer

In addition to the performances it is hoped that visitors will spend some time at the centre and explore the other options on offer. “We want people to get an experience of the festival with that Kasi feel. Beside the theatre where we will be staging great shows we will have an Artists’ Lounge where artists can mingle with one another, a place to share ideas and discuss possible future collaborations. An exhibition of work by Mzimasi Funo and Mandisi Mcela will be happening throughout the festival. There is a tuck shop inside the venue, where people can buy refreshments. The Zolani Centre Amphitheatre will come alive on the weekends with music, poetry and hip-hop.”

I asked George if they had selected a specific theme for the programme. He replied, “It’s really amazing how our programme came to be. In the beginning we were thinking about the artists and companies we would love to have in the venue. We were also looking at some of the shows that were at the National Arts Festival, so that the festival can have that national feel. Unfortunately there were shows, such as Money Maker Reloaded and Tau that could not make it due to funding issues Now when you look at our programme, and how it has turned out, we have so many productions that deal with issues of women. We did not deliberately choose it, it just happened. There are a number of other themes in our programme but the theme around women is very strong.”

Both George and Mbongo think that the new decentralised format of the Cape Town Fringe is an improvement. “It was a good idea to take the Cape Town Fringe into the communities. I am very happy that they have managed to transform Makukhanye Art Room in Khayelitsha, Black Box Theatre in Delft and Zolani Centre in Nyanga East. And of course there are so many other venues they have transformed. This is a really great initiative which will add value to these spaces. I also think it is high time that audiences from town started to attend shows in the communities. So many people from the townships attend events in town. Now let’s see more people from town attending shows in the township.” 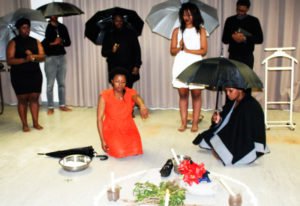 With such a varied and interesting programme you would be hard pressed to find a reason not to visit the centre. Spirit of Shakespeare in Africa is a deeply personal account of Mbongo’s journey in 2008 to the Royal Shakespeare Company in the United Kingdom as a recipient of the Brett Goldin Bursary. He juxtaposes his journey with that of his father’s. It’s an intergenerational story that uses the arts as a foreground for an exploration of family and traditional values.  A late addition to the programme is Stones, a hard hitting drama which was a runner up at the Gauteng Ishashalazi Competition. It’s the tale of of two men, Zuko and Sdima, one seeking revenge, the other finding love, united by a common secret which the action packed-script only reveals in the final scene.

The programme includes a strong dance component with the magnificent iKhaya choreographed by Sbonakaliso Ndaba and performed by the Indoni Dance Company returning to the stage after a sold out run at Artscape. Fans of the Cape Academy of Performing Arts will already have their tickets for Ellipses choreographed by Debbie Turner and Nathalie Vijver. The extract was part of the performance staged in Grahamstown in July which was met with resounding acclaim.

The invitation from Izityhilelo is to “come and see great productions and experience life in Nyanga East.”

I urge you to do so. I assure you, you won’t be disappointed.

Where and when: Zolani Centre 21 September to 8 October 2017