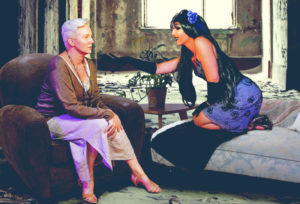 This was the question that Jessica McCarthy and local drag sensation Lady Aria Grey asked each other as they sat down to write a script together. What came out was Dandelions and Stones, a play about death and therapy… and Death going to therapy…. with a healthy dose of drag deliciousness thrown in for good measure, of course.

In Dandelions and Stones the embodiment of Death, collector of souls (who also happens to be a fabulous drag queen) decides to go to therapy to work through her feelings surrounding her job, her relationship with humankind, and her sense of self-worth. Through the conversations between Death and her therapist, the audience are invited to explore the connections between life, death, and time, as well as see mortality from a completely different angle, that of Death herself.

The play is to a large extent the brainchild of actress and writer Jessica McCarthy.  It was born out of a combination of her fascination with the drag art form, an existential longing to connect with other humans about the difficult subject of our mortality, and a dark and silly sense of humour. Jessica had been threatening to write a play since she was about 12, and had been in love with drag queens since she was about 10, so Dandelions and Stones has been a long time coming!

Jessica was always a helping hand in the wings when Callum Tilbury was creating his drag character of Lady Aria Grey.  With their history and Callum’s knowledge of the drag art form, his broad experience writing plays, and of course his sense of humour, Lady Aria Grey was Jessica’s obvious choice of collaborator in developing the script. 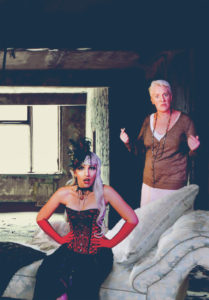 Dandelions and Stones is directed by Beren Belknap, the former creative director of acclaimed theatre company The Space Behind The Couch. Beren’s experience with puppetry, visual theatre, and comedy made him the perfect addition to the Little Kitten production team.  The play stars highly acclaimed actor Claire Watling as the therapist, and Jessica herself, debuting her new drag character Lady Anjelica MacDeath.  Not only does Lady Anjelica wow us with her fabulous costumes and insights about death, she even performs a new musical number by the cabaret superstar Godfrey Johnson.

Another aspect of the production is Jessica’s dedication to trying to change to some age-old wrongs of the theatre industry. The fact that artists are constantly expected to work for free or for “exposure” is a painful insult that she really does not wish to reinforce. For this reason she is adamant that her creative team will get a salary, even though they are producing an independent piece of theatre. The team launched a crowdfunding campaign through Thundafund and were overwhelmed by the initial outpouring of support.
Although things have slowed down, Jessica is hopeful that more backers will help her see her dream through (the dream of paying artists what they are worth, that is) and they have some lovely rewards available for their backers – every little bit helps!  https://www.thundafund.com/project/dandelionsandstonesplay/

What: Dandelions and Stones

Where and when: Alexander Bar from 29 January to 4 February 2018