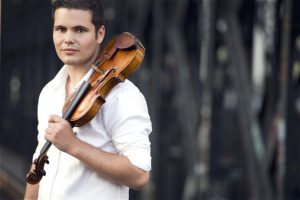 Alexander Gilman, the violinist performing twice with the Cape Town Philharmonic Orchestra and with the Cape Town Concert Series, has extra baggage with him this time – his six month old son, Levi Joshua, who is visiting South Africa as the 15th country in his short life.

Gilman and his wife, the pianist Marina Seltenreich, are also bringing Gilman’s mother to help. This is only because they can’t take Levi with them into the recital they perform together, although he has been known to sleep comfortably during the music and wake up to the applause! No surprise, since classical music is in his genes! Unfortunately he cannot apply for Frequent Flyer status until he is two …

The work Gilman will play with the CPO on Thursday, 7 February 2019 is the Korngold Violin Concerto, a work he will repeat at the Kirstenbosch concert with the CPO on Sunday, 24 February. In between he will play the Korngold in Durban (14 February) and Johannesburg (20 and 21 February). With Seltenreich, he will also give recitals at La Motte (16 February) and in Johannesburg (17 February  and perform sonatas by Beethoven and Franck as well as Piazzola and Prokofiev. 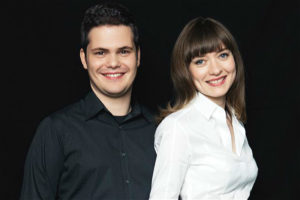 Gilman and Seltenreich have been performing in South Africa since 2012 when they gave their first recital for the Concert Series.  He loves playing with his wife who is, in fact, virtually his only duo partner now. They formed their duo in 2002.

“We have given hundreds of recitals and we are now like one person when performing. We have a common understanding and are so close musically to each other,” he says.

He performed first with the CPO in 2010, such a great experience that he made a recording in 2010 with the CPO which won a Diapason d’Or and in 2017 performed with one of his students and in a second concert as the soloist.  He also gave a masterclass to CPYO, UCT and students from the music colleges and will do so again on this tour.

Teaching has become his passion and he has reduced his solo engagements to concentrate on teaching, giving master classes (he is off to the Royal College of Music London in April), and working with the LGT Young Soloists, a group of brilliant young musicians he established in 2013.

The ensemble has just completed its fourth CD and he is also excited about the release of a solo CD by one of its stars, David Nebel, with whom he played in Cape Town two years ago, in which he performs the Philip Glass Concerto with the London Symphony Orchestra. Coming up for the LGT Young Soloists is a tour of Austria, beginning with a concert in the Vienna Musikverein.

“When I started teaching (he teaches at a music college in Zurich now”), says Alex, “I promised myself I would do it right. I give my students as intense lessons as possible. Being surrounded by young talent is so inspiring and when my students reach the heights that David has or when another student won a huge scholarship it is so exciting.”

All this means he has scaled down his own solo engagements and means that he can be selected, choosing to come to Cape Town which is a place he loves.

“This wasn’t an easy decision, to take three weeks out of my schedule and to anyone else I would probably have said no!”

Alexander Gilman was born in Bamberg and at the age of seven he made his debut at the Gasteig in Munich. He studied in Cologne and then graduated with his master’s degree with distinction in Zurich. He performs on a Guadaganini violin made in Parma in 1769.

What’s on his wish list? A concerto with the Cape Town Philharmonic Youth Orchestra!