How does Indian cinema do courtroom drama?  Watch Rustom and consider your verdict at 12.00 noon on 10 February 2019 on SABC 3. 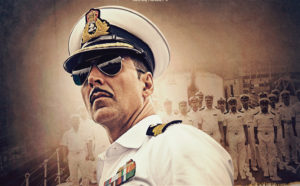 A navy officer is betrayed by his wife and his friend, who is subsequently found dead of gunshot wounds, with the obvious suspect seen walking away, carrying a pistol.  An open-and-shut case – or is it?  Rustom is a feature film from India that presents a fascinating look at honour, love, politics and criminal law – and it is heading for the home screen as part of the SABC Bollywood Festival.

A crime thriller set in the 1950’s, this carefully crafted movie by director Tinu Suresh Desai stars Akshay Kumar in the title role of navy Commander Rustom Parvi and Ileana D’Cruz as his unfaithful wife, while Arjun Bajwa plays the treacherous friend. Combining a love triangle and courtroom drama with a back-story of government corruption and the arms trade, the film is based loosely on actual events that led to the so-called “Nanavati” case.  This contributed to the end of the jury system in India’s general courts.

Although Akshay Kumar has been called “India’s Jackie Chan” for his spectacular stunt work, martial arts prowess and comedic abilities, his portrayal of the title character shows his talents as a serious character actor, with a nuanced performance showing the noble and darker sides of the naval commander.  Akshay received a National Film Award for Best Actor at the 64th National Film Awards for his role in Rustom – and according to Forbes, he is the seventh highest-paid actor in the world.

Rustom is one of 26 hand-picked titles featured in the SABC 3 Bollywood Festival 2019 with screenings scheduled for 12 noon every Sunday.