I don’t know what to write about this one man, true-life, surreal, mystical, achingly funny show, other than I cried from laughter, wept in painful recognition, gasped in wonder and exited into a different universe than the one I arrived from tonight. 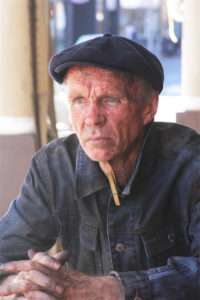 An Extraordinarily Ordinary Life is Jervis Pennington’s mostly all true story of how he went from homeless to fearless, with beautifully penned songs, whimsical musings, bitter laughs, deals with God, and some hilarious and to-the-bone observations of life in this city, this country, this strange old spinning orb.

A wooden bench is centre stage and it is the focus of the piece. A battered and torn Jervis Pennington appears, with bruises, dust, ripped denim jacket, bandages on both hands. A street-fighter who lost his last round.

And then in rambling but endearing style, Jervis tells us his story, from his terribly poor childhood, to weird navy experiences, to finding himself homeless, to seeing the world from a gutter. All this separated out with sweet, mesmerising song, and wickedly sharp observational humour.

When Jervis talks, or sings, about love, it is as beautiful as it is mundane and debilitating. When he talks about what the shrink said after his accident where half his brain was scrambled the shock of who is sitting on the bench hits home like its own blunt force trauma.  When he talks about music it is a love affair that still ignites.

This show is uncomfortable, satisfying, brooding, poetic, delightful, mad and uncontained. It is true, and fable, and myth and miracle. It is testimonial, prayer, dog fight, death and drama.

It will not be caged or categorised, but it will open you up, as open as Jervis is, cut open and raw, but with enough light to pierce through, for love.

What: An Extraordinarily Ordinary Life