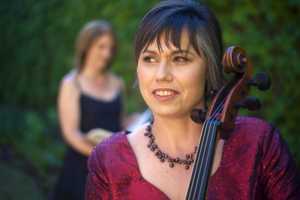 Many of us had trips cancelled because of Covid but not many of us can see what good came out of that. However, Anmari van der Westhuizen (pictured left), cellist and soloist in the second CPO Winter Cyber Symphony concert, is one of those, says PETA STEWART:

“It was a great disappointment when my visit to the International Piatigorsky Cello Festival in Los Angeles was cancelled on the eve of my departure in March 2020, but I was able to deepen my virtual connection with some of the great cellists like Johannes Moser and Alban Gerhardt – their talks on their Patreon Page motivated me to such an extent that I could keep on practising,” says Anmari.

And it was practising that really kept her going, “It was good to set goals – I think everyone should do that – and my goals included learning new repertoire such as the Poulenc Sonata, the Solo Sonata by Ligeti and the cello part of Hendrik Hofmeyr’s Sonata for Cello and Piano.  Hendrik sent me a recording of CPO associate principal cello Eddie McLean and pianist Josè Dias so I could to know the score better.”

But practising is not all she did.  Anmari reconnected with her former teacher, the superb German cellist Maria Kliegel and, with Maria and 35 cellists from ten countries, Anmari being the only one from South Africa, they made a recording of the Locatelli Sonata which is on YouTube – see below:

She also took part in the tribute by cellists to the late Marian Lewin, and made a recording with Swiss cellist Estelle Revaz of the Boismortier duo and one with the highly-rated Odeion String Quartet, the University of the Free State’s quartet-in-residence and the Free State Symphony Orchestra’s principals, Hidden Colours of the Free State, which was part of the Klank en Klassik Festival and which won a Fiesta nomination. The Odeion String Quartet, which Anmari joined when she first took up her post in Bloemfontein in 2008, also released its new CD, Colours of the Free State with works by Mokale Kaopeng, Nadia Burgess-Lindemann and Allan Stephenson.

Appearing on TV representing the Odeion String Quartet at the Fiesta awards was one thing, presenting concerts live was another.

“It was weird, as everything is these days, to perform with no audience.  In recording, one relies only on one’s own feelings and of course there was hardly any applause. I performed in a Perspex cubicle so that I was socially distanced.  Making music with others is what we do, but one almost felt isolated. But I have such a passion to perform that I grab any opportunity!

“Of course it was great to perform again with the CPO and Maestro Gueller, and in the wonderful City Hall. This brought back so many memories. The Haydn C major concerto is often rated as a concerto for the youth (in fact I learnt the first movement as a teenager) but one should never underestimate its technical challenges. The second movement has beautiful long lyrical lines, and displays the different tone colours, The final movement is joyful, something we all desperately need to hear during these challenging times.” 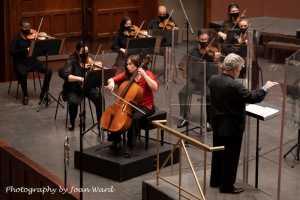 Anmari is no stranger to Cape Town and the Western Cape, having studied first at the University of Stellenbosch for her B Mus. Now, associate professor and head of the Odeion String Quartet at the University of the Free State, she completed her studies at the Mozarteum, Salzburg and the Hochschule für Musik, Cologne, with Maria Kliegel, and received her licentiate diplomas in performing and teaching from UNISA before graduating with a doctorate from the University of Pretoria.

Based in Bloemfontein, naturally she also performed there.

“Last year I was fortunate to perform the Saint-Saȅns Cello Concerto with the Free State Youth Orchestra and conductor Alex Fokkens in the Free State Botanical Gardens. I also performed two recitals with Anneke Lamont for the Johannesburg Music Society and in Bloemfontein which helped me stay ‘concert fit’,” she notes.

“One so easily loses one’s stamina and nerves for performance without performing regularly.”

Can’t wait for a sold-out hall

In keeping going in the last 15 months, leaving time spent with husband and three children aside, she practised regularly – it was the Dvorak Cello Concerto that most sustained her –  and of course teaching, mainly online and in person at the University and her private pupils.   She also has students in Cape Town, Stellenbosch, Gqeberha, Pretoria, Welkom and Wellington, so Skype proved very useful.

“Thanks to the internet, I actually felt more connected to the international music world than ever before. Living in the centre of South Africa adds to the sense of isolation, which the internet helped me combat.”

Of course she can’t wait for the country to open up again, to travel and above all to perform to a sold-out hall.

When: Streamed on the Quicket platform. Full series from July 8; this concert July 15 – 19.