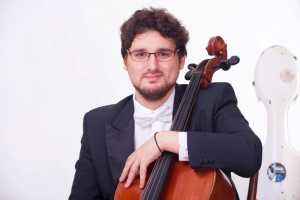 It started with a bout with Covid-19 which left him with the after effects of a lack of stamina. But then things got worse as his mother and sister got ill and they moved in together to last out the illness. Sadly, though, his mother did not recover even after 25 days in hospital and while loss is never at a good time this loss was at 2am on the morning of the first day of the unrest in KZN so they spent a week “from hell” without food and petrol, dealing with their grief.  The co-principal of the KZN Philharmonic since 2015, he was able, however, to get some emotional sustenance from his cello as he prepared the Boccherini Cello Concerto for this performance with the CPO.

Aristide is generous when it comes to musical influences.

“Marian Lewin was tremendously important to me, and I was inspired cellistically by the CPO principal cello Peter Martens. But it was renowned pedagogue and long-time principal cello of the Tonhalle Orchestra, Thomas Grossenbacher, who was perhaps my greatest influence.”

Aristide continues: “He taught me how to translate my feelings into my performance. He was strict with me, and I learnt to be conscious of what I am doing. He also taught me what has become my axiom: ‘never play badly because you are my student and it reflects on me’.  I can’t remember a time when I haven’t taught and now I teach with this in mind for my own students! To teach is to learn and to learn is to teach, as Bernstein said. If it wasn’t for teaching I wouldn’t be half the cellist I am today. Plus there’s always the fact that I have to know what I am doing to teach in case a student asks! I am always thinking ahead about playing and practising.”

Aristide grew up in a house full of music, and having an Italian grandmother certainly helped.

“My mother was a teacher and a pianist, and my father was a teacher who also studied singing in Italy and when he retired he taught singing so I was surrounded by this.  I remember when I was a toddler seeing a book with a bear playing a double bass and I decided this is what I wanted to do. But when I was 11 my parents put a cello in my hands and I had my first lesson with Kolio Kolev, a cellist of the KZN Philharmonic. I am still in love with the instrument, how it looks and how it sounds.”

Some years ago when he was at the Stellenbosch International Chamber Music Festival, he had a conversation with Bernhard Gueller, himself a cellist, one who had performed the Boccherini Concerto years ago with an orchestra in Stuttgart; so when it transpired that this was the concerto of choice, he was delighted.

“I have a special affinity with Boccherini. I think these were the first recordings of cello concertos my father bought for me.  Italy, the culture and the language which I picked up in my youth and have revisited recently is in my blood and I think this cello concerto, reworked by Friedrich Grützmacher, has got the best of Boccherini. People say it’s Romantic and I don’t agree even though it should be played Romantically, but the structure is Classical with some long Romantic lines.”

It’s not Aristide’s first appearance with the CPO – he performed a couple of times in Youth Classical Music concerts and was also an ad hoc cellist for two years when he was a student at UCT for his B Mus, when two musicians each took one  year’s sabbatical. He has also performed as soloist with  the KZN Philharmonic, Johannesburg Philharmonic and Cape Town Baroque Orchestra.

After his UCT studies, he left for Zurich where he obtained his MMus, thanks to a scholarship from the prestigious Oppenheimer Memorial Trust, at the Zürich University of the Arts, where he studied with Grossenbacher.

Aristide has already performed in such venues as the Zürich Tonhalle and Vienna Musikverein, Herkulessaal in Munich, Wiener Konzerthaus and the Berliner Philharmonie, and won numerous prizes both here and abroad.  Masterclasses were given to him by cellists such as Maria Kliegel, Gary Hoffman, Wolfgang-Emanuel Schmidt and Claudio Bohorquez, and he has given masterclasses for the South African National Youth Orchestra, the University of Cape Town, and at the KZN Philharmonic’s Orchestra Academy.

Man of many phases

Aristide is a “man of many phases”  and while he is a non-fiction reader he goes through phases of, for instance, art history then ancient Roman cities then music. “I am sometimes  too impatient for fiction, I want facts!” He also loves movies and series on Netflix, cycling and simply driving a car anywhere anytime.  “In another life I could have been a limo driver.”  He also went through a phase of repairing instruments and making bows.

For now he is happy. Happy that the concerto went well (the CPO musicians agree!), and happy to do what he is doing – performing, playing in an orchestra, playing chamber music with people like Nina Schumann and Christopher Duigan and in large ensembles.

When: Streamed on the Quicket platform from 7 October 2021