IS Art Gallery in Franschhoek will host an exhibition of the Intsikizi Tapestries from the Keiskamma Art Project during the Franschhoek Literary Festival (FLF) and, through the gallery, will also present the book The Keiskamma Art Project – restoring hope and livelihoods recently published by Print Matters and written by Professor Brenda Schmahmann. 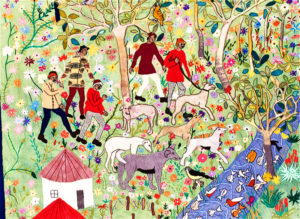 The Keiskamma Art Project, begun by Carol Hofmeyr in 2000, provides opportunities to over a hundred people in the tiny Eastern Cape settlement of Hamburg, South Africa, to support themselves and their families. Members of this remarkable project are best known for the compelling and exquisite large-scale artworks they make collaboratively which include embroidery and needlework. Several have been exhibited internationally and a number are in important collections – amongst them the Keiskamma Tapestry which is on permanent loan to Parliament.

The six piece set of the Intsikizi Tapestries shows the hunt for the endangered Southern Ground Hornbill (Intsikizi) and focuses on the natural environment.  As with all the major works of the project a famous European art work, The hunt for the Unicorn, was the starting point for the style, composition and content. In the Intsikizi Tapestries the theme is followed in a Xhosa context showing a Xhosa traditional hunt with dogs for the ground hornbill. In the South African context Xhosa dogs are often trained to hunt by hunting the ground hornbill as it is slow to fly. It is also associated with rain making, so is hunted in times of drought.

It is now endangered and the hope from this work is to engage in a deeper understanding of nature and its meaning in Xhosa life thus helping to restore traditional values of respect and awe of the natural world.

These outstanding six pieces were made with six artists and 24 embroiderers, under the direction of Cebo Mvubu, Production Manager, Keiskamma Art Project, master embroiderer and ceramicist, and founder Carol Hofmeyr and were first exhibited at the 2015 Grahamstown National Arts Festival in the Christ Church Hall.

Mvubu will be one of the speakers at the opening of the exhibition on Saturday May 20 at 11am. Taking the stage with Cebo will be well known fine artist, compulsive creator, natural teacher and friend of the Keiskamma Art Project, Elizabeth Vels.

In addition Cathy Stanley and Cebo Mvubu will give walkabouts at 2pm on Saturday 20 May and Sunday 21 May at 11.30am and 2.00pm. During the walkabouts the Xhosa relationship with birds and how they are classified in Xhosa culture will be explained.

The exhibition will be on show for a month after the FLF. 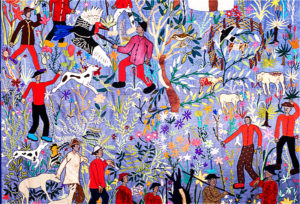 Carol Hofmeyr emphasizes how collective work can enable significant improvements in people’s lives: “Over the 17 years we have worked together, many volunteers have taught and shared skills and we have built a close and caring community of embroiderers, designers, artists and friends – a collaboration that has become global. A group of over 100 women and a few men who are uniquely skilled in making art using textiles and especially embroidery shows that when people work together a miracle of transformation can occur.”

Many of the Keiskamma Art Project’s large-scale works rework well-known paintings and other art from the West, such as the Bayeux Tapestry, Picasso’s Guernica and the Ghent Altarpiece. But they do so in such a way that they highlight issues of concern to people in South Africa. Engaging with the histories of Xhosa speakers and the long-term effects of colonisation, the works are also concerned with twenty-first century challenges such as the impact of HIV/AIDS or the threats posed to the natural environment and flora and fauna within it.

Adding to the exhibition will be the presentation of the recently published book The Keiskamma Art Project – restoring hope and livelihoods by Professor Brenda Schmahmann. This gorgeously illustrated volume reveals the history of the project as well as exploring the motivations and ideas that underpin the makings of its works. Meticulously researched, the book is valuable not only to art historians, but is an inspiration to anyone with an interest in the visual arts or rural development in Africa. Magnificently and comprehensively illustrated, this volume is the first to be devoted to the Keiskamma Art Project and is destined to be the authoritative book on this remarkable project.

What: Intsikizi Tapestries from the Keiskamma Art Project