National Geographic Wild dedicates a programming line-up to Australia on this country’s national day, Sunday 26 January, 2020. Suffering one of the worst tragedies of our time, with extraordinary bush fires sweeping through large parts of the country, animal lives have been lost on an unprecedented scale. Home to some of the most iconic wildlife in the world, the devastation has had far reaching effects worldwide.

Honouring this remarkable continent, its wildlife, sea-life, landscapes and people, Australia themed programming will broadcast from 10am to 6pm CAT on National Geographic Wild (DSTV 182). Learn more about the natural wonders down under and the fascinating wildlife to whom Australia is home.

Australia’s Deadly Monsters 1 – Nightmares of The North. 10.10am

Swinging between drought and deluge, Australia’s tropical Top End is literally teeming with life – and death. When prey is abundant, the Nightmares of the North are on the prowl. Nowhere is safe – Saltwater Crocodiles terrorise river systems, while toxic Box Jellyfish lay waste to estuaries, and White-bellied Sea Eagles rain death from above. These ruthless monsters wreak havoc in Australia’s tropical north.

Fringed by tropical rainforests, the majority of the Australian continent’s vast interior is dominated by arid grasslands and expansive red deserts. Scorched and drought stricken, these extreme conditions have given rise to dramatic outback monsters – iridescent scorpions, boxing kangaroos, and the world’s most venomous snakes battle for supremacy between the dunes.

Monstrous raptors, vicious devils, cunning death adders and more, meet the Stone Cold Killers patrolling the undergrowth of Australia’s vast forest reserves. Adept survivors, these savage beasts stop at nothing to take their quarry any which-way they can – dead or alive.

The eucalyptus forests of Eastern Australia are famous as home to cuddly looking koalas. But there is more to the lush woodland than meets the eyes – in the undergrowth, strange birds build elaborate nests and rip off each other’s calls. Australia’s weirdest creatures make these forests their home. But it is the koalas that steal the show in the forests, and when mating season comes around it turns out they are not as cuddly as they first appear!

Their kingdom is the desert: in the heart of Australia lives the largest marsupial on earth, the red kangaroo. Months of drought, blistering heat and a few patches of dry grass – to live here you need to have your wits about you. Australia’s wildlife has no shortage of bizarre survival strategies, as this episode spectacularly proves.

The dramatic dry southern plains of Australia. Wombats here seem to spend most of their time sleeping, but they are experts of survival, resting to conserve energy to help beat the heat. Their lives have gotten harder in recent times because of invading alien species – toxic plants and killer bunnies that breed so fast they eat the natives out of house and home. For all of these animals and plants the biggest challenge is the landscape itself and when summer rolls around, Australia really turns up the heat!

Red rocks and kangaroos at sunset – this is Australia as we know it. The most concealed area remains perhaps the most mysterious on the continent: the tropical rainforest in the north east of the country is home to kangaroos who climb in the trees. Down Under is a continent full of natural wonders!

It might be one of the most famous continents on the planet, but the story of Australia hasn’t been told quite like this before. Come face-to-face with Australia’s most iconic – and most mysterious – animals including the cassowary, tree-kangaroo, dingo, echidna and platypus as they soar, swim and stalk through the unspoiled and spectacular environment.

The survival of wildlife over 24 hours in Australia, at the end of the wet season. In the air, the Sea Eagle is the master of the skies, able to pluck fish from the water or a bat from the air. In the billabong, the Salt Water Crocodile, the largest reptile on earth, reigns supreme, actively pursuing prey or laying in ambush. 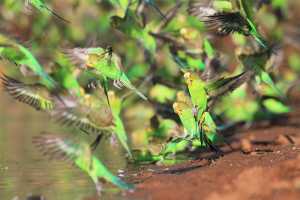 Take an aerial odyssey across Australia, a dramatic continent full of strange and unique creatures and places. Experience powerful natural forces as we soar over Australia’s iconic landmarks of Uluru, the Great Barrier Reef, and Lake Eyre. In each location we descend to reveal how topography, climate and geographic isolation continue to challenge and shape the creatures that live here, and how those creatures interact with each other.