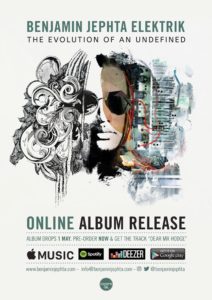 The 2017 Standard Bank Young Artist for Jazz, Benjamin Jephta, will be taking the road with the support of Concerts SA in anticipation of the release of his sophomore album  The Evolution of an Undefined.

His debut album, Homecoming has received m any accolades including a SAMA and Metro Award nomination and award for ‘Best Male Artist’ and ‘Song of the Year’ at the Wawela Awards in 2016. With this new offering, Benjamin fuses his love for jazz with hip hop, electronic and rock music, reflecting on the influence of popular culture on young people in the 21stt century.

‘Evolution of an Undefined’

About his new album Benjamin says: “All art is evolution. What we create builds on what came before – our histories, our memories – and transforms into something new. Evolution of an Undefined is that process. It’s about staying connected to tradition while reaching towards a new identity. About standing with feet planted in two moments – the past and the 21st century. This music fuses jazz, electronic and hip-hop, moves beyond genre and creates itself through sound. If Homecoming was about rediscovering who I am, now, Evolution of an Undefined is about who I will be. Modifying. Reconstructing. Progressing. Final form: undefined.”

The album is available for pre-order on iTunes and Amazon Music and releases on 1 May, 2018. Jephta will tour various venues from this week, launching the album live in Gauteng, KwaZulu-Natal, Western and Eastern Cape provinces. Copies of the new CD will be on sale at the performances for R 150.