On Sunday 7 February 2021 at 6pm (CAT), National Geographic Wild kicks off Big Cat Month 2021 with Jade Eyed Leopard, from world-renowned local big-cat filmmakers, National Geographic Explorers and co-founders of the Big Cat Initiative, Beverly and Dereck Joubert. Narrated by the Academy Award-winning and Emmy Award-nominated actor Jeremy Irons (Watchmen, The Lion King), the one-hour special transports viewers to an idyllic paradise, where for the first time ever, National Geographic cameras capture the story of a young leopard, Toto, during the critical first three years of her life. Viewers follow this cub with deep aquamarine eyes – an exceptionally rare trait – and experience her challenges and triumphs firsthand as Toto learns the fundamental skills of survival and makes her passage to adulthood.

A famous lion and a speedy cheetah

Cecil: The Legacy of a King, premieres Sunday 14 February at 6pm.This incredible special follows the life and legacy of one of the world’s most famous lions – Cecil. The ultimate big cat king, Cecil was a warrior, a father and a loyal brother. But his untimely death at the hands of an illegal hunt in Zimbabwe spelled the end of his extraordinary reign; evoking feelings of fury and sadness to all who hear his tale across the globe. 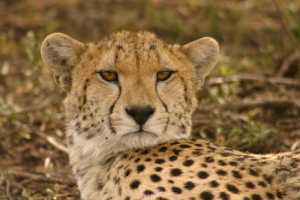 Still in Africa, Serengeti Speed Queen tells the story of cheetah Nzuri, the speed queen of the Serengeti – for whom being fast isn’t enough – on Sunday 21 February at 6pm. She is constantly bullied by hyenas on the grassland and hunted by lions in the marsh. When two of her cubs are killed, the family is exiled to the forest. There, she learns to adapt her hunting methods and adds strategy to speed in order to outwit her enemies and steer her remaining cubs successfully to adulthood.

Big Cat Month 2021 culminates in the premiere of Tiger Queen of Taru, by award-winning filmmaker Aishwarya Sridhar on Sunday 28 February at 6pm. This unique special that was filmed over six years tells the story of Maya the tigress in a tiger reserve in Tadoba, Central India. Here, Bengal tigers chase wild dogs, fight sloth bears and feud among themselves over bloodlines and territory in never-before seen footage. Maya writes her own rules when it comes to raising a litter, yet motherhood doesn’t come easy. However, one thing is clear, Maya will do whatever it takes to secure her bloodline within the Kingdom of Taru.