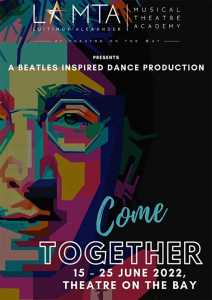 At Theatre on the Bay

Come together The Beatles Covered / Uncovered is LAMTA’s exuberant and entertaining dance production for 2022, where once again a host of top South African choreographers will uncover the stories behind some of the Fab Four’s greatest works – as covered by famous (and not so famous) musicians and songwriters alike.

The Luitingh Alexander Musical Theatre Academy is on top of Theatre on the Bay, and is home to the next generation of exciting South African talent.
Book at Computicket.

Singer Louise Howlett joins pianist Albert Combrink, Charl Clayton- saxophone and Dylan Tabisher on bass for a special musical journey in the beautiful surrounds of 6 Spin Street.
Louise sings her blues on Broadway from the early 1930’s of Harold Arlen to staples from Legrand and Lloyd-Webber to the new era of Jason Robert Brown and more

Doors open at 6pm for a light supper, included in the ticket price before the show begins at 7.30pm. Cash bar is available
Book at Quicket, or singingladylouise@gmail.com

At The Cape Town City Hall

Morning final rehearsals are open at 11am
Organised by Friends of Orchestral Music. Book at Quicket.

At The Cape Town City Hall.

Morning final rehearsals are open at 11am.
Organised by Friends of Orchestral Music. Book quicket.