CLAIRE ANDERSON was lucky enough to experience Carl Orff’s Carmina Burana from a slightly different perspective – within the choir. Here’s what she says: 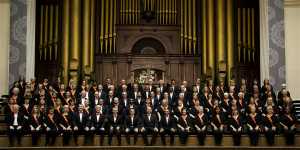 On 7 June 2019 the City Hall hosted a rendition of Carl Orff’s Carmina Burana: Cantiones Profanae. Richard Haigh conducted the Philharmonia Choir of Cape Town, three excellent soloists, two magnificent pianists, and the fine Fold ‘em Percussions Ensemble lead by Frank Mallows. I’m lucky enough to be part of the choir so I could witness the performance from the other side of the stage.

I’m a relatively new addition to the Philharmonia and I had never heard the full Carmina performed before. But I loved it in advance of listening, thanks to my judging a work by its title (which translates as “Songs of Beuern: Secular songs for singers and choruses to be sung together with instruments and magical images”). The words are based on medieval poems and sung mainly in Latin (with parts in Middle High German, Old Provençal, and Old French) and they address some timeless themes: the fickleness of fortune, the pangs of despised love (and the ecstasies of the requited kind), as well as the unifying power of hearty drinking.

The City Hall stage was set with two pianos, some chairs for the soloists, and range of instruments signalling the promise of percussive pleasures to come. While many of the puffer-jacketed patrons were still finding their seats, the first half began promptly with the two pianos and no introduction. The pianists, Sandra Kettle-Loubser and François du Toit, exchanged a brief nod and began, perfectly in time. This synchronisation was the defining feature of the first half for me, and renewed my appreciation for the internal metronomes of professional musicians. Each pianist had an attentive assistant beside them, who turned score pages unobtrusively. The pianos themselves, a pair of gleaming Steinway concert grands, had been pushed together to form a sort of yin-yang, if yin-yangs were rectangular, and included red and gold, as well as black and white. 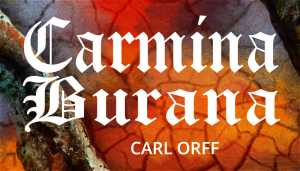 The music was in unison, then in harmony, then sensitive, then strident, and prompted spinal chills quite unrelated to the cold weather railing outside the hall doors. The seating arrangements meant that the choir was on stage for both halves of the concert (though we only sang in the second). Consequently, I could see François du Toit’s hands reflected in the glossy wood above the keyboard. It gave the impression that the piano duet might really have been played by eight hands, four of which existed in ghostly mirror image. I was regretful that the piano blocked Sandra Kettle-Loubser’s hands from view for I was mesmerised by those of her partner, which alternated between floating and spidering across the keys.

Being on stage under those bright lights without singing made me feel more observed than in other concerts. But it also reminded me that this observation goes two ways. Over the swaying heads in front of me, I could look down on the audience just as much as they could look up at me. As the performance went on I found my eyes returning to certain faces in the crowd, watching for their reactions: familiar faces (of my parents, and some friends) but also some of strangers, like the family in the front row, arranged in descending order like Russian dolls. The two small boys’ lack of fidgeting shamed my own restlessness at sitting for so long without a backrest.

The percussion brought the first half to a dramatic finish, and continued into the second half, which was visually and aurally fascinating. An array of musicians delighted and surprised the audience with everything from timpani to glockenspiels to gongs. In the beginning their playing was sparse, and intermittent, but as the evening progressed the percussion positively thundered, and reawakened any nodding audience members. Sitting above the stage gave the choir an excellent view, and we were able to watch each percussionist’s intense focus on their own part.

The conductor, our own Richard Haigh, worked characteristically hard to ensure that the nuances of the piece came across. The sound swelled to fill the room, then fell away to expose the solos, which were vulnerable and stentorian in turn. Conroy Scott, the bass, was familiar to the choir because he sang Messiah with us in April, and I was pleased to have the chance to hear him again. Apart from an enormously strong and beautiful voice, he also approached the rehearsals with a sense of humour, which made the experience lighter for us all. The tenor was Willem Bester, whom I hadn’t heard before but enjoyed. He managed to sing the part about a dying swan without a hint of a giggle—the mark of a true professional. Elizabeth Catharina, who sang soprano, astounded me so completely during the rehearsal that I forgot to sing afterwards (as did several of my fellows). Her performance on the night was, if anything, more spellbinding.

Somehow the second half of Carmina, more so than previous concerts, reminded me how central trust is to performance. You have to concentrate, and sing out, and then trust that you will sing the right note, and that others will sing it with you, and that you will watch the conductor enough to come off at the right place (but also follow along well in your score), and that the choir will work with the orchestra, and that you won’t sneeze midway…

But in addition to these hopes and fears there is, of course, the sound. There are moments of simple listening, and chances to appreciate the music, the beast that the performance produces. For me, the slow layering of the harmonies in “Reisi (Round Dance)” was one such moment, when all physical realities of standing on stage fell away. It’s hard to speak about being in a choir without sounding like a City of Cape Town advert that explains how “working together creates something good”. But there is something special about singing together, and that feeling remains after the conductor has brought off the singers, and after the last notes have rung out into the air. I left the hall sore-backed and full-hearted, stepping out into the darkened streets and the rain.