Celebrity Game Night Season 2 starts on 7 February 2021, at 8pm on E! (DStv Channel 124). Returning to lead their celebrity squads to victory are original team captains Jason Goliath and Ayanda Thabethe, while the razor-sharp Anele Mdoda reprises her role as host. 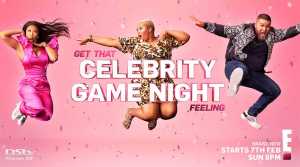 And now Celebrity Game Night S 2 welcomes new celebrity guests, along with some returning faces, who take each other on in hysterical games such as “Where Are You Going?”, “Popped Quiz” and “Clue Boom.”