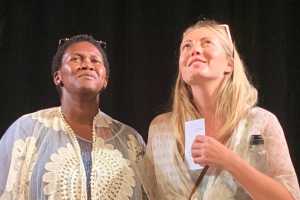 “Context is all” said Margaret Attwood, and in relation to Clouds Like Waves, it’s certainly all-important. Because the backstory to this new piece of theatre reflects, to a certain extent, the very essence of the work – that of separate pieces, coming together.

The Covid pandemic has been so very, very hard on performing artists and creative teams. Theatres have shut, careers have hit cul de sacs. Shows have been postponed or cancelled. Amidst all this, playwright/director/actor Megan Choritz did the unobvious. She put out a call for those interested in taking part in a new production. For no payment. But for the love of theatre.

And she got a response. An amazing response – from actors wanting in, to a venue being offered. Lighting, design and costume people came on board. A co-director took a seat. Separate pieces, coming together to present Clouds Like Waves, a play with many segments under one roof. 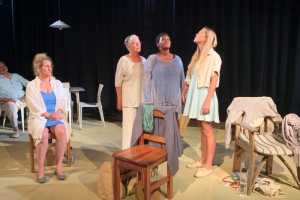 A mingling of moving parts

So that’s the context. Then there’s the execution. And what a joy it was to experience this. The Theatre Arts space, with seating arranged in a kind of C shape, encapsulated the intimate mood of the play, as solo, duo, trio and larger ensemble vignettes unspooled. Clouds Like Waves is not a linear work, as such, but rather a mingling of moving parts – much like clouds, or waves, themselves. There are themes that create currents of commonality – and there are bits that just appear by themselves. But the echoes of love, loss, fear, fighting, death and yes, dating, carry across. There are moments of raw sadness, and fierce anger, and quirky humour. There are soft corners and hard knocks. And there is no neat resolution – expect for a perfectly placed Royston Stoffels, book-ending the beginning and end of the work.

Clouds Like Waves is bold, innovative, gentle, funny, heartbreaking and sometimes odd. I was thoroughly engrossed – by the script, the authenticity of the star cast, the sensitivity of the directorial team.

It’s just a pity it has such a short run. This is a dream team, making a dream come true. But maybe, when the world becomes more Covid-less, we’ll see it again …

Book: Tickets cost R120 and are available on www.theatrearts.co.za