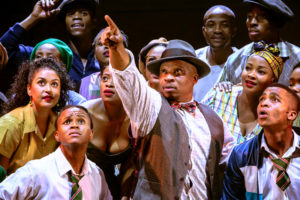 From 2 January, 2018 he stepped into the central role of Pop in the production, which is currently playing until 18 February 2018.

Presented by Eric Abraham and The Fugard Theatre, this staging of the historic musical King Kong has received five star reviews and rapturous responses such as “a knock-out success”, “simply magnificent”, “a tribute to South Africa’s performance arts legacy” and “a theatrical treat”.

Dube comes fresh from the success of an international tour and Johannesburg run of The Market Theatre’s The Suitcase, adapted and directed by James Ngcobo from the short story by Es’kia Mphahlele.

He was last seen on the Fugard stage in Mongiwekhaya’s I See You, which was presented by The Market Theatre, Johannesburg and the Royal Court, London in association with The Fugard Theatre, Cape Town. For this role he won the Naledi Theatre Award for Best Actor and was nominated for a Fleur du Cap Best Actor award.

Dube needs no introduction to South African audiences as a much-loved actor and presenter on TV and film. This includes an incredible seven series of Dube on Mondays, No. 1 Ladies’ Detective Agency, Suburban Bliss, Jo’burg Blues and Dube Reloaded. On the big screen he has performed in films such as Hotel Rwanda, Love & Broken Bones, The Long Run, Millinium Menace, Hopeville and Mandela’s Gun. He is also well-known on TV as the face of Clientele Insurance.

His extensive list of theatre credits include Janice Honeyman’s Robin Hood and the Babes in the Wood, Julius Caesar (Nelson Mandela Theatre); You Fool How Can The Sky fall (Windybrow Theatre); Who Really Freed Nelson?, Jozi Jozi (The Market and The Baxter Theatres); Street Sisters (Stadsscchouwburg, Amsterdam); Scribble (The Baxter Theatre); Survival (The Johannesburg Theatre); Protest (The South African State Theatre) and Nongogo (The Soweto and The Market and The Canadian Stage Theatres). 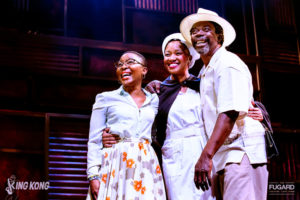 “We are delighted to welcome Desmond Dube back to the Fugard Theatre stage, where he last captivated audiences in his award-winning performance in I See You,” says Daniel Galloway, the Executive Director of the Fugard Theatre. “It is a limited season to catch this incredible star on our stage.”

What: King Kong
Where: The Fugard Theatre, Cape Town
When: Until 18 February, 2018
Book: Webtickets
WS