The SA Eco Film Festival will feature two directors whose work screens at the documentary showcase. Mattia Trabucchi is a film-maker, traveler and bicycle enthusiast. While working on an environmental research project at the University Of Stellenbosch he discovered an amazing program using bikes to empower youth in Kayamandi. The resulting film, Kayabike screens on Saturday, 25 March at 4.15pm and 4.15pm on Sunday, 26 March. Mattia will talk about making Kayabike, the environment and cycling.

He says “I am on a constant search for truth. I entered the world of documentary film-making through curiosity, I use it as a tool for the exploration of reality. I am particularly interested in exploring environmental and social justice issues, and my experience in Kayamandi gave me just that opportunity.”

‘The Story Of Jivamukti Yoga’

Jay Mac, director of What Is Real – The Story Of Jivamukti Yoga, is a “renaissance man”. Mac is the co-owner of AIR Yoga in Cape Town, a Jivamukti Yoga Teacher, a vegan chef and the creative director of Great Scott. “I gave up being a creative director to become a ‘full-time’ yoga teacher, but found myself drawn to both! And then the opportunity to make this film came along, and I thought let’s do it! That’s the irony and that’s the charm of the yoga practice we call life.”

The 4th annual SA Eco Film Festival is at The Labia. The theme is Change is Here. With 2016 seeing the hottest global temperatures ever, political upsets across continents, and accelerating technological advances from driverless cars to falling costs of renewable power – action is needed! The program explores how changes are affecting our world, and how our personal change can affect that world for the better.

Festival Film Synopses:
AGE OF CONSEQUENCES (80 mins, USA, 2016)
The Hurt Locker meets An Inconvenient Truth, this investigates the impacts of irreversible climate change, resource scarcity, mass migration, and pandemic conflict through the lens of US national security and global instability. These act as ‘catalysts for conflict’ in volatile regions of the world. It’s a call to action to rethink how we use and produce energy.

BEFORE THE FLOOD (96 mins, USA, 2016)
An Oscar-winning team filmmaker Fisher Stevens and Leonardo DiCaprio present a riveting account of dramatic changes occurring around the world due to climate change, as well as the actions we as individuals and as a society can take to prevent catastrophic disruption of life on our planet. DiCaprio travels to five continents and the Arctic speaking to scientists, world leaders and activists to gain a deeper understanding

CAN YOU DIG THIS (80 mins, USA, 2016)
South LA. Gang, drug and liquor problems, abandoned buildings and vacant lots. An urban gardening movement is emerging. Calling for people to put down their guns and pick up shovels. The film follows the journeys of four unlikely pioneers. These “gangster gardeners” are creating an oasis in one of the most notoriously dangerous places in America. This inspires people everywhere to get on and “plant some shit.”

CHANGE (5 mins, Singapore 2016 – animation)
Constant change is a natural part of Earth’s life, and its interconnected systems can easily adapt to slow change. But the natural balance gets disrupted when changes happen rapidly. Our growth and prosperity are changing Planet Earth, and some of those changes may be forever.

CYCLOLOGIC (15 mins, Sweden/Uganda 2016)
Traveling the streets of Kampala by bike is exhausting. Chaotic and dangerous traffic, endless queues, pollution, motorcyclists and cars attacking you from every angle. Urban planner Amanda Ngabirano’s biggest dream is to have a cycling lane in her city. An impossible task according to many. Not according to Amanda.

DEATH BY DESIGN (73 mins, USA 2015)
What is the cost of our digital dependency? Director Sue Williams debunks the notion that electronics is a “clean” industry by investigating a number of environmental and health catastrophes wrought by production of our gadgets.

FOOTPRINT (82 mins, France/USA 2016, sub-titles)
Takes a dizzying spin around the globe witnessing population explosions, overconsumption, limited resources, and expert testimony as to what a world straining at its limits can sustain. Spending time with indigenous health workers, activists, and the ordinary people who all challenge ideas and suggest the changes needed for our world to cope with the weight of humanity’s footprint.

FREIGHTENED (84 mins, Spain/France 2016)
“Sea blindness” refers to the shroud of secrecy that allows hugely lucrative shipping companies to shirk labour, ecological and ethical responsibilities. As trade globalises, so too do goods and services – at an alarming cost.

KAYABIKE (45 mins, South Africa 2016)
The life of a kids and their BMX coach training in a township (Kayamandi), waiting for competition day. Throughout the process they will learn much more than just how to pedal. Use of land, positive action and local involvement can effect an environmental change.

KOKOTA (30 mins, Canada 2016)
Tells the story of Mbarouk Mussa Omar from a small East African Island called Pemba. Ten years ago he visited a tiny neighbouring islet, Kokota. He was shocked by what he saw. How these unlikely heroes have managed to innovatively adapt to a warming climate while reforesting their island is inspirational. The film promises to leave audiences around the world believing that simple solutions really can have huge impacts for change.

LITTLE TEETH (7 mins Germany 2016)
Indonesia is one of the world’s biggest exporters of shark fins. They are consumed in a soup that is considered a delicacy. Rising demand devastates shark species. The balance of the ocean is at stake. One surfer on Bali didn’t just want to stand back and watch. Convincing local fishermen to sell the sharks to him alive instead of killing them.

SEA OF LIFE (86 mins, Canada 2016)
Julia Barnes embarks on a journey around the world to figure out how we’re going to save the most important ecosystem for our survival; the ocean. As acidity rises and fish populations decline, Sea of Life seeks to inspire change by exposing the truth, bringing audiences on an eye-opening adventure from the beautiful world of coral reefs into the heart of the environmental movement.

SEED – The Untold Story (94 mins, USA, 2016)
Passionate seed keepers are protecting our 12,000 year-old food legacy. In the last century, 94% of our seed varieties have disappeared. Chemical companies control the majority of our seeds, farmers, scientists, lawyers, and indigenous seed keepers. A David and Goliath battle to defend the future of our food this harrowing and heartening story features reluctant heroes rekindling a lost connection to our most treasured resource and reviving a culture of life.

SICELA AMANZI (12 mins, South Africa 2016)
In November 2015, parts of SAa were riddled with a severe drought that left over 6000 rural communities devastated. Film student, Mlu, watched the news but was shocked by the general lack of concern that seemed to be shared amongst his neighbours and family. He questioned the limits he would go to for his family to survive another day.

Bruce Parry has lived with Indigenous peoples all over the world. He has a unique insight into the human condition. His time spent on the environmental front line provides a broad perspective of our place on the planet. He explores what has happened to humankind since we stopped roaming and began to settle.

THE CHOCOLATE CASE (90 mins, Netherlands 2016)
In 2003 group of young Dutch journalists began a campaign against child slavery in the cocoa industry. Their journey towards a slave-free world cocoa began as part of a report on a current affairs TV program. Combining archival material with new footage and interviews an inspiring story is brought up to date.

THE VALUABLE WASTE (47 mins, Nigeria 2016)
Waste management is a problem everywhere. Across the world human activity continues to create issues for public health and the environment. Now with the cooperation of stakeholders contributing and participating in managed recycling schemes at a local level a healthy environment seems a possibility through a sustainable development in West Africa.

THERE WILL BE WATER (58 mins, Denmark 2016)
With the world rapidly running out of water, British engineer Bill Watts has a big idea: turning salt water into an energy source, and using large desert areas to produce energy, food and clean water. ​Funded by the Norwegian government, businesses and international organisations Mr Watts sets out to “green the desert”. But turning his light bulb moment into a viable commercial prospect proves a difficult nut to crack.

WHAT IS REAL (79 mins, South Africa 2016)
Join director and narrator, Jay Mac, as he poses the question “What is Real?” A personal journey of change told through the real-life story of two visionaries, Sharon Gannon and David Life. They have inspired, and continue to inspire, a world of change through a method called, Jivamukti Yoga. Told through the people that made that history around the world, spanning more than three decades including Sting, Russell Simmons, Krishna Das, Donna Karan, WAH and MC Yogi. 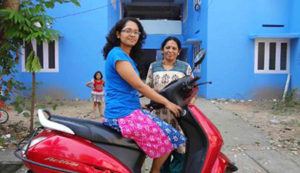 WOMEN ARE THE ANSWER (90 mins, Australia 2016)
Population growth has been left out of the climate debate because it is seen as controversial, yet it is one of the most important factors. The global population has passed the 7 billion mark and India is overtaking China, but one state in southern India has found the solution. The history of Kerala and ‘the Kerala Model’ is outlined, using it as an example of achieving population control in developing countries without coercion.