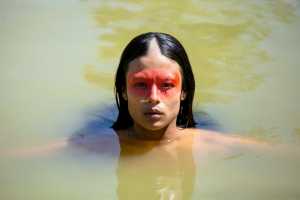 IMDB describes the plot of Frontera Verde like this: When a young Bogotá-based detective gets drawn into the jungle to investigate four femicides, she uncovers magic, an evil plot and her own true origins. This is like the sales pitch to make a series sound mainstream. But I should have known. Usually if Bogotá is the location or setting, it is the exotic compared to the world of the west. Here Bogotá is the mainstream, west, usual, normal, and the Amazon Jungle is what is on the other side of the frontier. So, when female detective Helena Poveda helicopters in to solve murders, things get strange and unfamiliar very quickly.

Watching a series with actors I have never seen before, particularly actors who play ancient tribal Amazonians and speak their unique sounding language is like being given a window into another world. Everything is strange and unfamiliar, but the story is the same. Human. Flawed. Tragic in its inevitable destruction. These actors, in this setting, are mind blowing. All of them. I loved their characterisation, I loved the relationship they have with the camera, and their environment. They are complex, portraying a brutality and fragility that is reflected in the jungle.

The story is mad too. What starts off as a murder investigation soon spirals outward. Corrupt police, a local detective who has been cast out of his community, loggers with power and a brutal slave history, a strange Christian female sect, a white man’s obsession with the jungle and immortality, other immortals, the natural world, relationships, family, ancient rituals. It’s all there and it is compulsive watching.

Frontera Verde is strange, eerie, heart breaking, mystical, magical storytelling. It combines ancient with modern, ritual with medicine, police corruption with ancient colonialism and tribal superstitions. It is both dark and brooding, and exquisitely, naturally verdant. It is scummy and murky, and infinitely deep. It is the power of the jungle, the tragedy of war and the eternal struggle for power and control. It is the battle of the sexes – ancient and modern. It is where the jungle is she, mother, nurturer and witch. It is the oldest battle, fought by slaves and free, colonial powers and corporations, Western religion and old ways. It is very dense.

I have been very moved by this series. It has stayed with me, and it feels like it has changed how I am in the world.