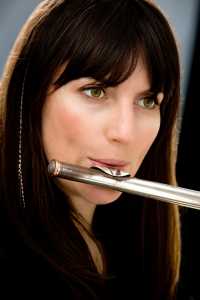 Busking, leading her section, playing chamber music, teaching at the German School, playing with her baby, it’s all in a day’s work for Gabriele von Dürckheim (pictured left), the Cape Town Philharmonic Orchestra’s principal flute, who is the soloist along with principal viola Petrus Coetzee in the CPO’s third Cyber Symphony series concert, says PETA STEWART:

They will perform Stefans Grove’s Concertino for Viola, Flute and Chamber Orchestra under the direction of Jeremy Silver. It will be streamed on the Quicket platform in April from April 8 to 12, 2021.

For now, although she loves playing with Petrus whom she considers a consummate musician (“Petrus plays with sensitivity, incredible musicality and I love his tone! Besides that, he is a very approachable, kind person and it makes it so easy to work with him”), it’s busking that is occupying her mind.

“Everyone is starved for live music – the musicians as much as the audience. For the CPO to survive this terrible time I felt the need to get involved and support what management is working hard at doing. Not that we have been sitting on our laurels – we have been extremely busy with concerts for streaming, mentoring our youth orchestra and youth wind ensemble musicians, and soon opera and ballet once more. Income and support are uncertain and I want to be part of any positive message and have some kind of influence on audiences who are our life’s blood,” she says.

So now, when the orchestra’s weekend schedules allow, Gabriele is part of a trio with violinist Maretha Uys and cellist Dane Coetzee making music at the V & A Waterfront. Her trio alternates with the duo of violinist Samantha Durrant and violist Maja van Dyk. And coming up will be flute and viola duos!

Gabriele has been principal flute since 2002 and two and a half years ago when the CPO performed Mahler’s Symphony No. 2. “Resurrection”, she knew once more why “we do music. I could feel, just as I felt when I played principal piccolo in the Symphony Orchestra in Malaysia in the same piece that music connects us to the divine.  I was so in awe of the piece and when I played it as principal flute with the CPO I felt I had reached a pinnacle of my career.” 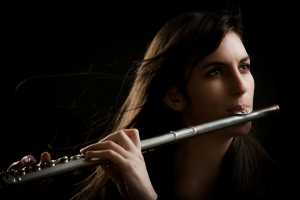 Gabriele has been one of the lucky ones – she went for a Covid test in sympathy with her two-year-old son Oliver’s nanny who seemed to have symptoms. “Asanda M was negative but I wasn’t,” she says.
“On the one hand I was really surprised that I had it; on the other I was had such mild symptoms, the worst being my loss of smell. But at least I have a lesser chance of becoming ill or infecting anyone for the next few months!” she says.

Being a mother has changed her life, but less than she though it would. “I was worried I was going to get into the MOM box and put myself in second place and, while I have in some ways,  I have retained my ability and time to organize my own concerts. We brought Dachshunds into our home so the expansion of love came easily – our hearts first grew to encompass the dogs and then Ollie. My life has become much fuller.”

So what gives her the zest for life that is so apparent in everything she does?

“I was a miserable kid, not feeling accepted.  Music, the only thing I think I was any good at, gave me a place in the world where I could feel comfortable, liked and respected. That connection to the divine that music brings, that’s what keeps me going. It’s knowing I’m part of something much bigger than just me and my life.”

Gabriele grew up with classical music in the house although neither parent was a musician. (Her mother is the renowned artist Marlene von Dürckheim.)  “My mother tried to get me to play the recorder, but it died a slow and painful death. She told me that when I was five or six I liked to listen to the Mozart flute concerts. I hated school work and needed an academic push when I was in Grade 5 so my mom promised me a flute in exchange for a 70 per cent pass. I thought the flute was a weird instrument,.. there was no connection to the blow hole but with the right teacher, Eva Tamassy, it was clear within a year of starting that this is what I would do for the rest of my life,” says Gabriele. She went on to complete her Higher Licentiate at the University of Stellenbosch, winning several prizes along the way, before going to study with  leading flautist and teacher Trevor Wye in the UK.

“Although I love England now, I didn’t then; it was a starting point for auditions in Germany but in Germany there are 1000 of me applying for positions and I never made it. So, it was on to the Malaysian Philharmonic but after a really enjoyable year there, a sort of holiday, I decided to come home and build a life. I tried the German route again but that wasn’t for me and fortunately this position opened up.”