Photographer Gary Hirson has his exhibition The Machine behind the Mountain, about the maintenance of the Table Mountain aerial cableway, at the Youngblood Gallery. 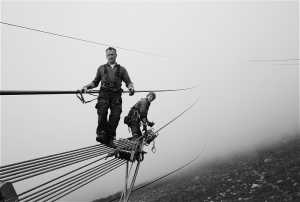 Back in the winter of 2005, Gary Hirson was commissioned to photograph pictures of the maintenance process of the Table Mountain cableway, for future project manuals. Little did he know that, what was initially assumed to be a technically-based manual, would turn into a unique portfolio of artwork spanning over 15 years.

“Initially I never thought that this was something for the public to see. I was just trying to capture the scale of the operation and man working with machines in such a unique environment. Whenever I spoke to people about the maintenance shutdown, I mostly encountered surprise and bewilderment as many people didn’t realise that it took place. That was how the idea of the exhibition came about – to showcase what it involves,” says Hirson.

Unique perspective for The Machine behind the Mountain

Hirson is the only photographer in the world who has captured the cableway’s annual maintenance and shutdown period in such detail historically, over 15 years. 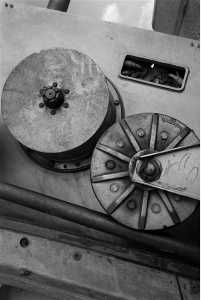 Few people realise the importance of the cableway’s annual maintenance shutdown period, and even fewer realise the enormous amount of time and effort it requires to make sure such a feat of engineering remains safe and simple to use during the rest of the year.

Hirson claims the breakthrough that resulted in defining his work as an art form instead of a technical project was his awareness of the human side of the machinations. “My focus is driven by the human-interest angle, the man vs. machine relation,” says Gary Hirson. “It’s a lengthy process, to tell such a detailed visual story. You have to show an emotional connection with every photo, describing a story in clarity and capturing the real moments.”

The Machine behind the Mountain captures the wonderment of an amalgamation of wires, gears, and moving metal parts, expertly crafted with Swiss engineering and put together with South African hands. All with the sole intent of taking people on a five-minute-long journey to reach the top of Table Mountain.

What: Gary Hirson: The Machine behind the Mountain