Graham Norton has a new show airing on BBC Brit, DStv Channel 120 from 8 October 2019, and his first guests will be Oscar-winner Dame Helen Mirren, the one and only RuPaul Charles, comedian and actor Jack Whitehall, adventurer and documentary-maker Simon Reeve, and Danish pop band Alphabeat. 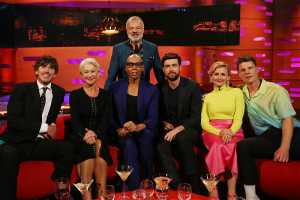 Helen, talking about the scale and scope of her new Sky Atlantic series Catherine the Great, says: “It’s huge and incredible. Telly has changed exponentially over recent years, so if you’re doing something on the wealthiest woman in the world, it’s got to be pretty spectacular.”

RuPaul, asked if he is actually the world’s most famous drag queen, says: “I insist I am! I haven’t worked 37 years just to be a drag queen!”

Talking about working in the US with Dwayne ‘The Rock’ Johnson, Jack Whitehall says: “He is the best man I have ever met.  He is amazing and the kindest guy.  He invited me into his travelling gym. The machines are enormous, and he had taken all the weights off for me and I still couldn’t manage them. I went into a corner and jumped on a bike and listened to my audio book.  He’s wearing a chain around him, crunching all these weights and listening to rap music and I look like I’m pootling along like I’m in Call the Midwife!  He looks over and says, ‘What are you listening to?’  I said, ‘Eminem’ but it was actually Michael Morpurgo!”

Simon Reeve joins Graham for a chat about his new one man show tour. Asked about the show and how it came about, he says: “I was contacted out of the blue to see if I would like to speak at a few venues.  I thought it would be a few WI type places, which would have been wonderful, but it turned out to be much bigger than I expected.  I am loving it.  I’ve never done anything like it before.”

Alphabeat perform Shadow live in the studio, before joining Graham for a chat about their tour and album.

And finally, Graham pulls the lever on more foolhardy audience members brave enough to sit in the Big Red Chair.

What: The Graham Norton Show