#HeTwo: Evita exposed! with Pieter-Dirk Uys is the latest show by the comedian, who is joined by Evita Bezuidenhout at the Theatre on the Bay. 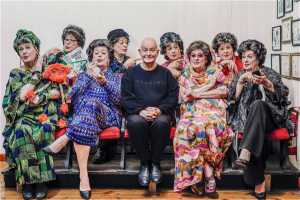 The last thing you expect is to find yourself at the funeral of the most famous white woman in South Africa. Is it possible that this national icon is dead? How come and why? And then again, how? If Evita Bezuidenhout doesn’t exist, how can she be deceased? And why do so many people keep thinking she’s real?

That was the question that Pieter-Dirk Uys has decided to answer in this latest entertainment, #HeTwo: Evita exposed! where he and she appear together on the same stage. During her remarkable 40 years of existence in the whirlpool of South African politics, first as the wife of a National Party Minister in the Verwoerd Cabinet, and then as the South African Ambassador in the Independent black homeland republic of Bapetikosweti, Evita Bezuidenhout has met remarkable superstars on the world stage.

Nelson Mandela invited her to appear at his many rallies and loved her koeksisters. Archbishop Emeritus Desmond Tutu called her skattie and taught her to toyi-toyi. Apartheid Foreign Minister Pik Botha started believing the rumour that he was having an affair with her and Dr Piet Koornhof donned a costume to dance a waltz with her.

All these realities will be exposed in the show #HeTwo, a title inspired by the #MeToo revolution, but in this case referring to the two people Pieter-Dirk Uys has been responsible for during his long career as an entertainer: himself and herself. He is also joined on stage by other characters whose paths Mrs Bezuidenhout has crossed; PW Botha and Pik Botha being the two most obvious. But Sir David Attenborough and Mrs Petersen also appear- he to pay tribute to Tannie’s charm and recipes, while Mrs Petersen remembers being a twenty-year old char working for the Bezuidenhout family on the eve of Hendrik Verwoerd’s assassination in 1966, and so revealing some shocking details ignored by historians.