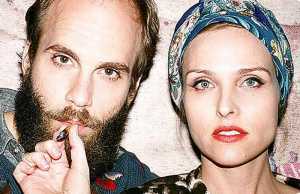 I have been a fan of High Maintenance for years. I can’t remember when or where I first saw Season 1, but I fell in love with this tiny series about a weed guy; a nameless guy who delivers weed to his customers all over New York.

The beauty of this series is that each episode is both stand alone and connected to others, creating a world, random and colliding, and totally, beguilingly addictive (ahem). Weed guy, Ben Sinclair, delivers weed to his clients in every episode, and some are hilarious, while others are deeply moving, but all are character studies and perfect, single storytelling triumphs.

Ben Sinclair and his ex-wife Katja Blichfeld created this wonderfully quirky show as a web series (also on Showmax, and the perfect place to start before moving on to Season 1 and 2) and then it was taken up by HBO, and it enjoyed four seasons. Each 20-minute episode manages to present every type of New Yorker, every neurosis, every variant on relationships, and every gender, job and outlook. The best part about it is that weed guy is so laid back, so not judgemental, so flawed himself, and so utterly part of the scenery. Some characters reappear in later episodes. Others appear only once but are so beautifully articulated I think about them as if they exist in real life. I imagine them beyond their small appearances.

The music is perfect in every episode. The backdrop of New York is charming, gritty, quaint and hard, and weed guy travels through it on his bicycle, revealing it from that unique angle. The dialogue is superb. It must be improvised. The acting is naturalistic, inspiring and absorbing. The cinematography is fresh.

Each episode ends with a strange and mesmerising scene over which the credits appear. Sometimes they are as beautiful as the episode itself.

This series has everything

I watched the 19 shorter web series episodes like Alice in wonderland this last weekend. It was trippy. They are beautiful. I can’t stop thinking about the bird watching cancer survivor, the ice cream seller, the religious Jewish family who needed weed guy to do them a favour, the pink lady street performer, weed guy’s niece, the author who cross dresses, and the guy who sleeps two hours a night. That’s just a tiny sample of these amazing characters.

Ben Sinclair is a genius writer and performer. This series has everything, is everything. Enjoy.