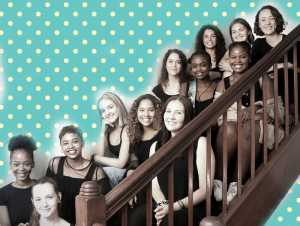 “Behind every great man stands a great woman.” So goes the American adage, inferring that a woman’s influence can only be used, indirectly, to advance her husband’s career. She herself can have little or no standing in political, scientific, artistic or business affairs. In fact, she is often spurned when she displays independent pursuit of such matters. Even today, certain societies believe a woman’s counsel must only be used to influence her husband’s path. Girls, too, are often barely educated; yet, as the eleven-piece chorus in History Girls repeats: “Wake up! A sister is as valuable as a brother.”

Although history books reflect male achievements (good and bad), of women, records don’t always credit their actions which have brought a semblance of equality into our society.

One exception could well be Nongqawuse (Onela Metuso), a visionary (1841-1898) whose prophecies culminated in the Xhosa cattle killing movement that caused deadly famine in 1856/7. Yet her place in history is not defined by that act. It is marked by the fact that in a  male-dominated culture at 15 years of age, en masse, the Xhosa people LISTENED to her.

Nongqawuse is one of the eleven famous women on whom this unusual, exceptionally insightful, well produced and excellently performed musical is based.  Marcel Meyer’s music and lyrics laid bare how women such as Lilibet (Jeani Heyns), the UK’s serious, dedicated, future Queen Elizabeth 11, supported by her bubbly sister Princess Margaret Rose (Sarah Falconer) found inner strength to accept their royal roles. We learnt how words kept hope alive for diarist Anne Frank (Tiffany Miller), the young Jewish girl who died in a Nazi concentration camp days before World War 11 allies liberated the camp. And what Indira Ghandi (Tyral-Lee Miggels) contributed to India in her position as India’s first, and still, only woman Prime Minister.

From a civils rights activist to a saint (or two)

Tragically Sadako (Zoe Chetty) suffered pain of a different kind. Knowing that as a result of the 1945 Hiroshima atom-bomb fallout she had developed incurable leukemia, she spent her last days folding one thousand origami cranes before her death 1955.

Canonisation is not easily bestowed on anyone. But two humble women raised to sainthood were Jeanne d’Arc (Lara Visagie) and Albanian-born Mary Teresa Bojaxhiu (1910-1997). Jeanne, known as the Maid of Orleans, at 15 successfully led French forces against English soldiers during the Hundred Years Wars. Betrayed, and found guilty of heresy, the English (to their lasting shame) burned her at the stake in 1413. Mary Teresa Bojaxhiu – better known as Mother Teresa (Zoe Gray) devoted  her entire life working among Calcutta’s poorest of the poor. Pope Francis beatified her in 2003.

From countless tenacious women down the ages, Bianca Flanders’ script chose a fine-cross section. Through these she presented examples to our younger generation, that neither wealth nor position are  necessary to fight a cause that makes the world a better place. To Flanders’ stories, Meyer’s music and lyrics brought life. As did Fred Abrahamse’s direction to his young female, black-dressed, team. Despite school history seldom covering the impact of the women portrayed in History Girls, what impressed was this young cast’s sincerity portraying people they may not have known very much about, but obviously studied in order to deliver honest characterisation. Never did they sing or dance out of character –  although at times piano and voice-overs drowned out voices.

It’s unnecessary to dwell on how this past year has hit theatre, artists and theatre-loving patrons. However, if after such a bleak time, a production of this calibre sets the tone for up and coming shows, we will indeed be blessed. Thank you.