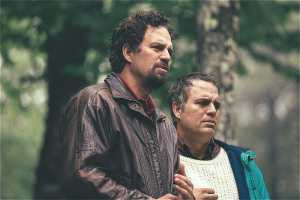 I KNOW THIS MUCH IS TRUE. Directed by Derek Cianfrance with Mark Ruffalo, Kathryn Hahn, John Procaccino, Rob Huebel and Rosie O’Donnell. Showmax.

This series should come with massive trigger warnings; abuse, violence, mental issues, family trauma, physical trauma, drug abuse, and serious doses of bleakness and misery. I was grateful that Showmax released it an episode at a time because binge watching could be harmful to your health.

In this six-part mini-series, based on the book by Wally Lamb, Mark Ruffalo plays middle aged twin brothers Dominic and Thomas Birdsey. Thomas is a paranoid schizophrenic, in and out of mental facilities and Dominic is haunted by his familial responsibility to his brother, which totally impacts on his own messy, dysfunctional life.

Set in the 80’s, the brothers’ relationship is told in the tragic present, with flashbacks to their damaging early childhood in the 50’s and their traumatic college life, when Thomas’s mental problems take shape and form.

The twins have no idea who their birth father was, and they have a complicated and brutal time with their step-father, Ray, who in his old age still lives in the house their Italian immigrant grandfather built.

I Know This Much is True is irredeemably bleak and depressing. It is also beautiful film making, with a layered and haunting script, superb cinematography, great sets, scenery and styling. But it is the acting that takes it to another level. Mark Ruffalo’s twins are so brilliantly drawn; so different, physically and in personality, yet they still have that connection – that twin thing that makes the two characters believable. He is incredible. I have no idea how he managed to pull off this emotional, physical and psychological complexity for two characters, let alone one, and the fact that they appear in so many scenes together. I was blown away.

The support cast is superb as well, especially John Procaccino as Ray Birdsey, Kathryn Hahn as Dessa and Rob Huebel as Leo. Another total surprise was Rosie O’Donnell as Lisa Sheffer, the case worker in charge of Thomas’s placement at the asylum. I have never rated her as an actress, and her awful politics are a mess, but she gives such an unexpectedly profound performance here. She is so moving, so connected, so tragic.

What: I Know This Much is True