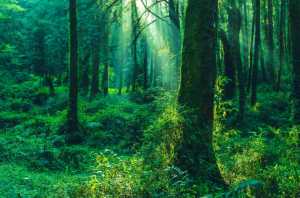 INTO THE WOODS: CONSTELLATONS AT SPIER. Conceived and created by Brett Bailey. Spier Wine Farm, Stellenbosch.

It’s generally accepted that when you go into the woods, anything can happen. Look at Red Hiding Hood. Snow White. Tom Thumb. Even Jemima Puddleduck. The woods, as both a space and a concept, can offer refuge, but can also be challenging. In fairytales, the woods are the other – not the village, not the known, not safety. The woods stand outside of reason, and therefore creativity and imagination can flourish.

Knowing this, theatre visionary Brett Bailey makes full use of the the lush foliage that surrounds the Spier Wine Estate in Stellenbosch to create a magical, mystical series of intimate encounters. Audiences are divided into separate groups, and then led to a series of small campfires within the leafy Spier forest. At each campfire (you visit three in an evening) there is a Guardian – who could be a musician, or a poet, or an actor, or a philosopher. And they share their story with you.

There is something incredibly ritualistic about being led by a guide (in my case the charismatic Credo) to each fireside gathering, the walk in the woods itself becoming a part of the production. Voices become hushed, nighttime sounds become loud, stars peek and leaves crinkle. It feels ancient. And yet the cars on the R310 can still be heard. 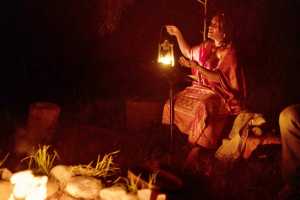 Living, breathing presence of the woods

This is the second year that Bailey’s Constellations is being performed at Spier, and it has the feeling of a custom, or rite. Some of this has to do with the incredible care gone into the choreography of the production, from the solid presence of the guides to the sheer eclecticism of the Guardians. And, of course, the living, breathing presence of the woods …

Theatre artist Gaëtan Schmid started the evening, storyteller and theatre-maker Nwabisa Plaatjie continued it, and musician Nkosenathi Ernie Koela rounded it off. I don’t want to go into detail about what they did – I really don’t want to spoil the surprise for others. But suffice to say I was drawn in and totally engaged. Each 30-minute session felt too short …

Constellations is so many things – astonishing, clever, beautiful, dynamic, heartfelt. It feels like the kind of theatre that just makes sense, at this point we are at. Go and feel it.

My Constellations experience was further enhanced by a scrumptious pre-show Spier picnic (think fresh baguettes, cheeses, falafel balls, cauliflower salad, pecan nut pie and more), and made extremely comfortable with an overnight stay in the rather nice hotel. It is probably one of the best ways to experience this production. Just sayin’.

Where and when: Spier gardens,  Stellenbosch from 25 November to 18 December 2021 at 8pm, with arrival promptly at 7.30pm. Because of inclement weather, the Saturday 27 November show has been moved to Wednesday 8 December