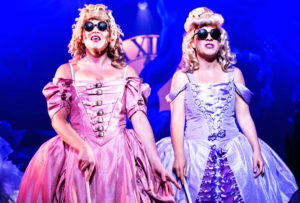 It’s ironic that Stephen Sondheim’s musical Into the Woods is not recommended for children, because in its own sardonic way it teaches the most honest, useful lessons about the way of the world. Unlike the fairy tales many are raised on, princes don’t always stay faithful to their princesses; good people die; and hanging your hair out a window so your boyfriend can climb up it is just weird. Most importantly, as the Into the Woods cast are to discover repeatedly, be careful of what you wish for – and be prepared to face the consequences when those wishes come true.

But ultimately, perhaps it’s kinder to let young minds stay in happily-ever-after-into-the-sunset mode for as long as possible. Even one of Sondheim’s characters sings this: “Stay a child while you can be a child.” And let adults appreciate Sondheim’s sardonic take on life, love, mutant giants and magic beans.

Into the Woods is based on a quartet of major fairy tales – Little Red Riding Hood, Rapunzel, Jack and the Beanstalk and Cinderella, with references to other tales also in the mix. Pulling the strands together is the plight of a young baker and his wife, who are desperate to have a child but have been cursed by a witch. To break their barren streak, they need to fulfill a number of quests. How they choose to do this, speaks as much to their moral values as it does to the reactions of the community around them. Everybody in this play, has a wish, it would seem – and it’s interesting to see how much self-interest will determine the direction of the narrative. 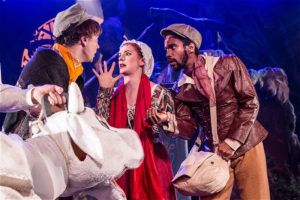 And interesting to see how this version of the 1986 award-winning musical is presented.

Into the Woods at the Theatre on the Bay

For starters, the production at the Theatre on the Bay is graced by the most atmospheric set. Designed by Greg King, who frequently works in tandem with director Steven Stead, it switches nicely from the supposed warmth and comfort of home (be it a baker’s kitchen or a stepmother’s lounge) to the creepy, sensual, scary shadows of the woods. Then there’re the costumes – Neil Harris – that swirl and captivate and are both funky and so, so appropriate. The lighting, too, by Tina le Roux, was deliciously moody.

And so to the cast – 18-strong, even with roles doubled up. And strong they certainly were, tackling what some regard to be Sondheim’s most technically tricky score with confidence and great delivery. The two princes (Zak Hendriks and Nathan Kruger) made for a deliciously comic duo, falling just the right side of camp; Cinderella’s stepmother (Dianne Simpson) had a great sense of timing and tight delivery; Rapunzel (L J Neilson) was surprisingly funny. Then there was gormless, sweet Jack (Graeme Wicks), his shrill, shouty mum (Candice Van Litsenborgh), glamorous but troubled Cinderella (Haylea Heyns) and the ever hungry (for what?) Red Riding Hood (Megan Rigby) – such talent and skill, the lot of them. 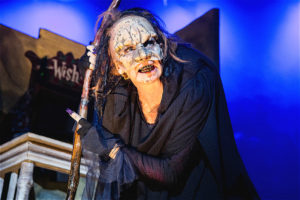 And then on top of that – Earl Gregory as the sweet but desperate Baker, willing to overstep certain boundaries to get what he needs, and Jessica Sole as his wiser but also somewhat wild wife – an attractive and accomplished couple working together.

And finally Kate Normington in the most wonderful role as the Witch, both her before and after versions exuding a lean, mean power. There’s an award waiting for her, I’m pretty sure.

Holding it all together, drawing the most out of this hard-working, high-achieving cast is director Stead, who never slackens the pace and drives the horses hard.

It’s a complex and demanding play, is Into the Woods, exploring morality, wish fulfillment, actions and reactions. It’s also highly amusing in parts, with a score that reflects a dry, sardonic wit and some very challenging vocal solos. This production, with its fine presentation, fabulous cast and firm steerage, does Sondheim proud. I would urge one to go – it’s a rich, rewarding experience.

What: Into the Woods