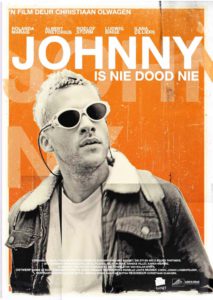 Just who goes up against a blockbuster to be from Disney/Marvel at the movies? Well. On our local circuit, if you are not into superhero movies, then this Afrikaans movie might just be the ticket for you.

Like Guardians of the Galaxy 2 it emphasizes its soundtrack greatly, but where it was a gimmick to set the tone in Guardian, with Johnny the soundtrack is central to the film’s story.

Johnny is nie dood nie though doesn’t have a great soundtrack despite itself, but revolves its entire story around the soundtrack to an entire generation of Afrikaners’ political awakening.

The plot follows two timelines – in the now four friends are having a braai on the Sunday after Johannes Kerkorrel committed suicide. As they reminisce about their student days at Stellenbosch University, which were greatly influenced by the new Afrikaans rock they were discovering, they also remember a friend who committed suicide back then.

Adapted by director Christiaan Olwagen from a stage play by Malan Steyn, the film is the celebrated theatre director’s filmic debut, and he carries over his strong scripting skill to the big screen.

He makes personal for these particular characters the impact of the Voëlvry movement on their political development – which makes this film an effective, yet intriguing way of learning more about the music and its meaning for an entire generation.

He also touches on the effect of the Bush War on white army conscripts in a less heavy- handed and manipulative, yet still emotionally affecting, way than My Father’s War.

Cinematographer Chris Vermaak’s penchant for the swirling camera does get a bit nauseating, but his use of continuous long tracking shots every now and then makes up for it. The opening sequence, especially, is beautifully unnerving as emotionally vulnerable Lise (Marais) wakes up and stares directly into the camera and then potters around the house, getting ready for her guests.

There is also a grotesquely gorgeous long tracking shot at a party – the kind of party only students can really throw properly, or appreciate in all its weirdness. One long shot slowly traveling through and around the house captures the surreal feel and brings you right into the moment. And, watch out for the clever riff off the Eet Kreef album cover. 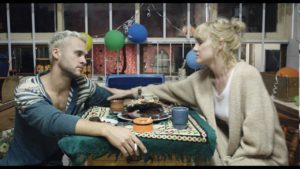 Much of the action takes places in the same house – which acted as a student dorm for them back in the day and is now home to Lise and Dirk (Pretorius), who host conscientious, feisty journalist Anja (Cilliers) and suave drifter Hein (Binge).

As the alcohol flows the four reminisce and tease each other with lyrics from songs to see who remembers best. The way Gee jou hart vir Hillbrow is used is especially haunting.

While there isn’t really that much time between the then and the now for the actors other than different hairstyles, they each are quite good at differentiating their behaviour which makes it easier to figure out which time frame you are in.

Olwagen has gathered a strong ensemble cast, but as usual Albert Pretorius steals the show – his Dirk character shows the most emotional change and growth, especially once you get to the last the last scene. Pretorius’ tortured student with a yen for the girl he can’t have, who grows into a responsible adult with essentially still the same goal, is the everyman who tries so hard to be part of the cool circle and ends up holding everyone together when things falls apart.

While the friends meet because Johnny (Storm) introduces them, and remained bonded because of how his suicide affects them, it is Dirk who nurtures the relationships, and Pretorius is a strong anchor for the ensemble piece.

Touching on friendship, betrayal, sexual and political awakening, this film is as layered and nuanced as any of the theatre work Olwagen has worked on over the years and bodes well for his film career.