Following the success of Tropika Island of Treasure season seven (#TIOT7) Tropika has officially announced the launch of #TIOT8 . In this eighth season of the popular campaign and TV show, seven consumers will once again join seven celebrities in paradise and compete for a shared smoooth R1 million! And the new host is popular Katlego Maboe (pictured below). 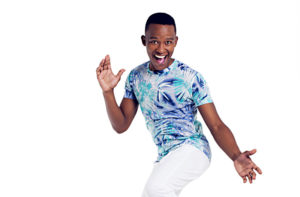 Previous seasons of the show have seen consumers and celebs venture to some of the most incredible destinations, including Mexico, Jamaica, the Seychelles, Mauritius and more. This year, the Maldives will set the scene for #TIOT8.

Perhaps best known for its idyllic white beaches and crystal clear turquoise sea, the Republic of the Maldives is situated in the Indian Ocean. This tropical nation is composed of 26 ring-shaped atolls, which are made up of more than 1 000 coral islands – many still uninhabited. With celebs and contestants competing in fun and challenging games to get to that smooth R1 million – against the breath-taking Maldivian backdrop – viewers will be in for a real treat!

Miantha Padayachee, Brand Group Manager for Tropika, is looking forward to seeing how the show plays out in the Maldives with a new group of contestants: “The past seven seasons of TIOT have been incredibly successful, and so for season eight we needed to up the ante and really take it to the next level. The Maldives is the epitome of smooth island living and will add a new dimension to the show. Fans can expect the same exciting and fun Tropika Island of Treasure that they have come to know and love – with a few surprise twists this season…”.

Katlego Maboe is probably best known as a host of the SABC3 show, Expresso. He also hosted two seasons of Strictly Come Dancing in 2014 and 2015, and has been awarded the title of Presenter of the Year at the 2015 and 2016 South African Film and Television Awards (SAFTAs). Year-on-year, Katlego has grown into a well-known TV presenter, singer, voice-over artist, MC, model and actor.

His charismatic nature has gained him many fans, and his inquisitive nature and zest for life (and travel) will stand him in good stead as he takes the reins and hosts #TIOT8.

“One really exciting part of #TIOT8 is finding talent across SA. Often, the contestants go on to become stars. So I’m really looking forward to the auditions! I’m also excited to spend time in the Maldives – it is the ultimate paradise destination – and to see what challenges the contestants will be put up against on the island.” Maboe says.

In addition to hosting the show, Katlego will also be performing the theme tune for #TIOT8 which will be launched to Tropika fans, soon.

Making it to the Maldives with #TIOT8

South Africans dreaming of amazing prizes, fame, fortune, and joining their favourite celebs in paradise, have a few ways to enter:

From 1 September 2017, buy any Tropika product and join the Tropika team at the #TIOT8 auditions:

Consumers who join at the auditions should keep an eye out for their favourite celebs, who’ll be making appearances when least expected. Competition for those seven coveted spots to join the celebs competing for that smoooth R1 million will be fierce, so consumers must bring their A-game to the auditions.

Solve riddles and get a golden ticket to the auditions

From Monday 4 September 2017, Tropika will be sharing a riddle a day on their social media with clues as to which celebs will feature in #TIOT8. Each day a new clue will be revealed, and one lucky person who correctly guesses the celeb each day will win a golden ticket that’ll allow them access to the audition phase and the opportunity to jump the queue.

South Africans who don’t make it to the Maldives still stand to win awesome daily prizes when they buy Tropika product, including: