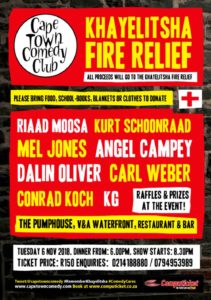 The Khayelitsha Fire Relief Comedy Fundraiser is a response to the devastating fire in Cape Town’s Khayelitsha on 20 October 2018.

Cape Town comedians have banded together, using their wit and banter to bring you hilarious line-ups of some of South Africa’s best comedians at a few shows around the city in November.

The final big, fancy, bells and whistles fundraising event will be held at Cape Town Comedy Club, The Pumphouse, V&A Waterfront on Tuesday 6 November 2018. The event promises to be super big and shiny, full of famous funny people, and lots of ooh and aah moments!

All proceeds will go to the Khayelitsha Fire Relief, so you can bring food, school-books, blankets or clothes to donate to the community that has been so devastated by the fire. There will also be raffles and prizes at the event.

The comedians promise a blazing night of comedy – because the only place they want to hear about a blaze is on a stage! Hastags: #RememberKhayelitsha #ComedyCares