The latest solo shows at 99 Loop are three new exhibitions by South African artists Mashudu Nevhutalu, Paul Wallington and Richard Ketley. The shows will open on Saturday, 4 July 2020 and run until Saturday, 25 July 2020. 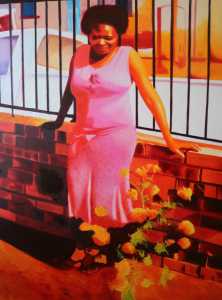 Mashudu Nevhutalu’s work centres around feelings of nostalgia; a longing to go back to a special or significant moment in time. For Nevhutalu, these feelings and memories are drawn from the faded hues of old family photographs.

His painterly interpretations and use of colour, however, are often bright and intense in an attempt to bring about feelings of euphoria. Palettes of warm oranges and vivid pinks saturate his canvases, reinvigorating images of the past whilst remaining true to their inherent familiarity.

Nevhutalu’s figures are often captured in a moment of peace and imbued with a sense of stillness. They are seen sitting, standing or simply enjoying a moment when nothing else around them seems more important than being present. Many of these figures are women, captured by Nevhutalu with a maternal sense of sensitivity and strength. This focus on female figures has much to do with Nevhutalu’s upbringing as he was raised predominantly by the women of his family. Apart from his mother, there was always an aunt, a grandmother or an older sibling there to nurture the artist. As such, painting women was never a deliberate choice of his but rather something that came naturally. In its essence, Matriarchs pays tribute to Nevhutalu’s familial past and the figures who forged it. 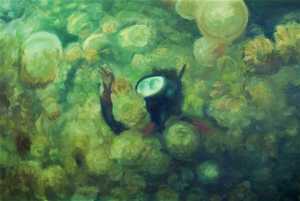 Paul Wallington imagines painting in relation to an information gap. A gap between imagining what one will create and what the result actually will be. In what one initially wanted to achieve through painting, only to end up somewhere completely different. Wallington is curious as to how paint, particularly oil paint, works as a medium, and how the painter must build upon layers in an effort to selectively erase and reveal their painterly vision. Information Gap is Wallington’s first solo exhibition and originated from his preoccupation with the studio as the driving force behind the creation of his work. As a physical embodiment of process, inspiration and practice, he believes that the studio has an undeniable presence in the outcome of an artwork.

In its entirety, the process of painting is often fragmented. Like a broken mirror, it gives hints rather than comprehensive narratives. These shards of information offer something more interesting than a cohesive story as they allow the viewer to link and communicate with the other fragmented pieces in ways personal to them- to bridge the ‘information gap’ with their own thoughts and feelings. For Wallington, the painting process is a mirror to another place which focuses on questions rather than answers. Where there is no beginning, no middle, or end- an ocean that is constantly moving. This distorted mind map, this glued together mirror missing so many pieces, is at the heart of Wallington’s desire to paint. 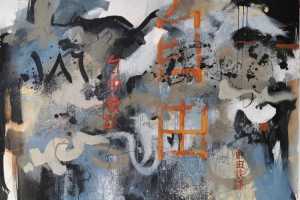 Richard Ketley’s Rust and Freedom presents a selection of work from the artist’s Tazara series. The series takes inspiration from the eponymous Tazara Railway connecting the port of Dar es Salaam in Tanzania with the copper belt of Zambia’s Central Province. Built in the early 1970s with Chinese support, the railway played an important role in the pan-Africanist vision of newly independent African countries. Ketley’s work reflects upon the railway as a symbol of economic development, independence and complex relationships that linger on the continent today.

Imbued with movement, Ketley’s abstract works are a response to the Tazara train journey itself. Part storytelling, part reflection- Rust and Freedom draws on both the concept of multi-panelled Chinese landscape-painting and action-painting inspired by a journey along the railway line. The exhibition and in particular, the seven-panelled painting entitled Roam, is accompanied by an essay written by Lucienne Bestall elaborating on the themes inherent in Ketley’s work.

What: Latest solo shows at 99 Loop