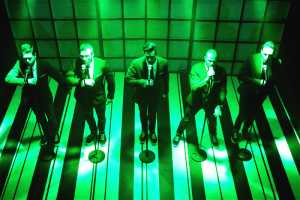 In a spirit of contrarian mischief, FollowSpot Productions have chosen to stage an all-male show in the middle of a month dedicated to celebrating all things female – which is most refreshing. Especially as the five-strong cast are well matched in good looks, proficiency and stamina, navigating smoothly through a repertoire of hits popularised by rock and boy bands of the last century.

The singing and musicianship are enlivened further by some sprightly comedy which punctuates the numbers, resulting in an evening of remarkably jolly entertainment in true FollowSpot tradition. Music rules, however, and carries the evening with something for everyone; younger audience members unfamiliar with hits by The Beach Boys or Crosby Stills and Nash discover those infectious rhythms with delight, while senior citizens relive happy moments from their youth …

A strength of the show is the ensemble uniting neatly differentiated personalities. The Searle brothers are bright and bouncy as ever; Alex Tops impresses with his wide range of register (his falsetto rendition is particularly arresting); Liam McDermott offers vocal proficiency with eye-candy, and newcomer Gareth Christie has the appeal of naivety, a willing butt of humour as he ventures on his début solo with the challenge of one-word lyrics: Tequila. A nice touch is the inclusion of the late Johnny Clegg’s Spirit of the Great Heart, delivered with warmth and brio.

Man Band has less physicality than most FollowSpot shows, but it is just as entertaining, with dashes of double entendre, some flirtation with the audience, and very tuneful singing to do justice to a choice array of yesteryear’s hits. Warmly recommended.

Where and when: Kalk Bay Theatre until 21 September 2019