A star-studded cast has been announced for a new Fugard Theatre production of Athol Fugard’s masterpiece Master Harold … And The Boys which marks the start of the Fugard Theatre’s 2020 season and tenth birthday year. (The Fugard was born on 12 February 2010.) 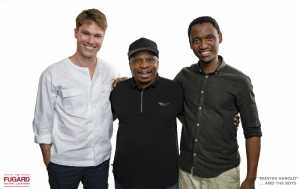 Presented by Eric Abraham and The Fugard Theatre Master Harold … And The Boys will run in the Fugard Studio Theatre from 4 February 2020. The production will be directed by the Fugard Theatre’s Artistic Director Greg Karvellas (The Road to Mecca, The Father, Shakespeare in Love, Clybourne Park, Bad Jews, Statements After An Arrest Under The Immorality Act). The cast features Kai Luke Brummer as Hally, Desmond Dube as Sam and Siya Mayola as Willy.

Brummer is the lead  in Oliver Hermanus’ new film Moffie which was invited to the Venice and London International Film Festivals and has been critically acclaimed across Europe. Moffie goes on general release in South Africa on 13 March 2020 with a premiere at The Fugard Theatre.

Dube is a much-loved actor and presenter on TV and film. He was last seen on the Fugard Theatre stage in the multiple award-winning musical King Kong, which earned him a Fleur du Cap Theatre Award nomination for Best Supporting Actor in a Musical. He also performed in I See You, a co-production with The Royal Court (London) and Market Theatre (Johannesburg), for which he won a Naledi Theatre Award for Best Actor and was nominated for a Fleur du Cap Theatre award.

Mayola is a writer, director and producer with his own production company. He is a seasoned film and theatre actor, and has appeared in series such as SABC TV’s drama series, Amaza , Mzanzi Magic’s Isikizi and kykNET’s Sara se Geheim.

Master Harold … And The Boys is written by Athol Fugard and directed by Greg Karvellas. Set Design and Lighting Design is by Wolf Britz, who recently received a Fiesta award nomination for his work on Statements after an Arrest under the Immorality Act.  Costume Design is by Widaad Albertus (Langarm, Happy New Year, Significant Other).

Set in a tea room in Port Elizabeth on a dreary, wet afternoon in 1950, Master Harold … And The Boys is a poignant coming of age story and exploration of a friendship between a young white boy (Hally), and the two adult black men he has grown up around (Sam and Willy), against the backdrop of the oppressive, divisive apartheid laws of the time. Although society dictates their education are worlds apart, Sam has helped guide Hally from boy to manhood, educating him about the realities and injustices of the world, while Hally in turn teaches Sam what he has learnt at school.

Their friendship has taken on an almost fatherly role for Hally, as he struggles with the strained relationship with his alcoholic father.  During their debates and reminiscing on the rainy afternoon, Sam and Willy talk about their dreams of winning a ball room competition – their ‘world without collisions’ – a metaphor for their aspirations and yearning to create a better life for themselves. The peace is broken with the news Hally’s drunken father is returning home, unleashing an anger in Hally that leads to an unprecedented bigoted outburst.

What: Master Harold … And The Boys

Where and when: Fugard Studio Theatre from 4 February 2020