When you come from a musical gene pool like that of the Van Dijk dynasty, there must be some satisfaction for Matthijs van Dijk in being considered one of the country’s most exciting contemporary composers/arrangers/performers, says SHIRLEY DE KOCK GUELLER: 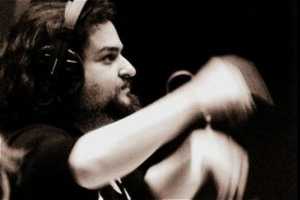 But Matthijs van Dijk doesn’t take anything for granted. With his Night Light Collective, Van Dijk is performing in the inaugural Jazz & Classical Encounters Festival taking place at the Spier Wine Farm on 23 November 2019, and delighted to be there.

“The festival is a fantastic idea,” he says. “While there are quite a few prominent local jazz festivals around, there really aren’t a lot that focus specifically on contemporary art music. With crossover elements in modern ‘classical’  music, much of the art music being written today will sit very comfortably next to modern jazz, and it’s a great way to grow the audiences for both.”

The Night Light Collective’s programme for Spier is an eclectic mix of original works by each of the group, woven together and bookended by an arrangement Matthijs van Dijk did of the song “Down To The River To Pray”.

It will blend jazz, free improvisation and contemporary art music elements, on traditionally classical instruments, such as the violin, double bass and piano, traditional southern African instruments, including the nyunga nyunga and umrhube bow, and electric guitar. It’ll include pieces such as Reza Khota’s “Lost Is A Place”, Brydon Bolton’s  “Radiant Beauty”, Cara Stacey’s  visual-score “Luhlata njengetjani” and van Dijk’s “How To Sit Underwater”.

Van Dijk was immersed in music from the day he was born – his maternal grandmother was a singer; his mother was soprano Suzi van Dijk, and his father the composer/conductor Peter van Dijk (his “About Nothing” tone poem is being performed by the Cape Town Philharmonic Orchestra in November).  Then his older brother violist Xandi is a member of Germany’s award-winning Signum Quartet and recently conducted at the Stellenbosch International Chamber Music Festival.

“As a budding composer,” van Dijk says, “I was extremely fortunate to grow up with an ‘in-house’ composer, my dad. Besides being able to take him works in progress for regular informal composition lessons, he also introduced me to new/influential works at a much  earlier age than many would have experienced. He definitely helped shape my curiosity for seeking out new music and ideas, while imprinting a bit of stylistic similarities in our music but also indirectly forcing me to develop my own musical language.

“The Night Light Collective (formerly The ShhArt Ensemble) was formed in 2014 when violist Sarah Evans and I were asked if we had anything we wanted to perform at a concert series at Kalk Bay Books. As I’d been trying to get my 7th String Quartet performed for a while, we used the opportunity to ask close friends Nicola du Toit and Galina Juritz to join us. A little later on, we were joined by Cara Stacey as a core member, and from there it very quickly became a fluid collective, changing its instrumentation depending on the project. All the music was written by members or close collaborators. What makes this special is that we are friends just spending time together, exchanging ideas. The conversation is incredibly rewarding, difficult sometimes though to find people to play our  music, but it’s  safe space to experiment with ideas in between commissions for other people.” 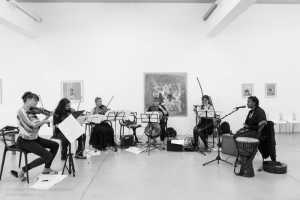 Van Dijk Matthijs started composing when he was nine and has written several works for orchestra and smaller chamber ensembles. He has won a number of prizes including the Priaulx Rainer Prize for composition while studying at the SA College of Music at UCT in 2003 and the SAMRO Overseas Scholarship for Composition in 2006. He has orchestrated sound tracks for several award-winning international films, the annual South African Horrorfest, and composed for all manner of ensembles from the New York-based duo Clockwise with South Africans Marc Uys (violin) and Jacqueline Kerrod (harp); a duo saxophone concerto for Shannon Mowday and Doug Masek, a viola sextet for the International Viola Congress in Stellenbosch and a Viola Sonata which was for the International Viola Congress in New York.

He’s also about to start work on a chamber work with musician/story teller Zanele Ndlovu, which will be premiered in February as part of a concert to launch Denis Goldberg’s “House Of Hope” project.

A very popular composer and arranger of choice for music promoters, Matthijs van Dijk is a sign that good contemporary music is going to be here with us for a long time!

The schedule (doors open at 1pm):