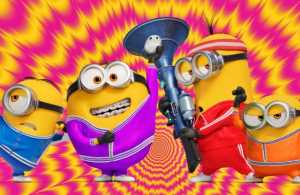 It’s been a while since I went to a movie in a movie house and being at the Labia for a 5.15pm press screening was an absolute treat. The plants and flowers at the entrance to Cape Town’s most loved, independent movie house have grown and flourished, and walking up the red carpet in the twilight had a magical realism feel. It was also load shedding, so the darkened foyer was like something out of The Greatest Showman – a strange, circus atmosphere with paper packets of popcorn and the ticket booth lit up like a fortune teller.

It was also charming listening to the excitement of the kids around us, and I felt the pang of what we have missed during Covid-19. This was also my first mask free event and it was lovely seeing actual faces!

What a pity then that the movie didn’t live up to the venue. With a voice cast that includes the awesome Alan Arkin and Julie Andrews, as well as the usual Steve Carell, I was thrilled by the opening credits, and the first scene, a motorbike chase introducing supervillain Belle Bottom, was exciting and gorgeous. It was also the chance to set up the beautiful seventies styling and period, gorgeously executed throughout the film, especially in the San Fransisco scenes. This should have been a laugh-a-minute, riotous, brilliant film. But it wasn’t.  Beyond the hilarious names of the supervillains – Jean Clawed (played by Jean Claude himself!), Svengeance (Dolf Lundgren) and Nun-Chuck, there wasn’t much else going on.

But there is no story to speak of, pretty much at all. Kid Gru is a pain in the butt. Also, I could be wrong, but I remember Gru having a brother? No brother in the movie. Also, the minions coming into kid Gru’s life was a teeny, weeny moment. No big deal at all. What a let-down. Aside from the Mexican gibberish the minions speak, and their occasional googly eyed emotions, they offer very little to the movie either. They kinda learn kung fu, but not really, and they kinda rescue Gru, but also not really, and there is this big stand off but I missed the plot (I may have dozed of or zoned out from boredom), and then it was the end.

What was that all about …

The kids around me had a ‘what was that all about?’ look on their faces at the end.

My advice? Go to the Labia for a fabulous movie experience, but don’t have high expectations for the movie itself. Actually, choose something else more satisfying.

What: Minions – The Rise of Gru