my whole body changed into something else is a group exhibition currently taking place from July to 3 September across the STEVENSON galleries in Cape Town and Johannesburg, curated by Sisipho Ngodwana and Sinazo Chiya.

The title of this exhibition is drawn from a quote by Sun Ra, in which the artist, thinker and composer describes a moment of abduction and renewal. Ra states that, in a pivotal journey between Earth and Saturn, his tangible form and personal history were metamorphosed, allowing him to continue existence in a truer mode: as an alien brought to preach peace.

In pursuing the questions raised by his assertion, this exhibition probes individual and collective ideas of bodily existence and processes of transformation, using works from 1950 to the present day. The participating artists attend to the challenges presented by history, the dictates of commerce, the sensory borders between how matter is experienced, and the perceptions of binaries and opposition – ranging from geopolitical conflicts to the tensions between humanity and the natural world in which we live.

Delve into the intangible

Mmakgabo Helen Sebidi and Portia Zvavahera delve into the intangible through paintings depicting events within the subconscious, echoing the altered states captured by Léonard Pongo and Pieter Hugo (work pictured right). In their respective photographic series The Uncanny and Californian Wildflowers, Pongo and Hugo offer visuals orbiting contemporary life under chemical and spiritual influences to discuss the supposed threshold between the somatic and the supernatural.

Rahima Gambo, Belinda Blignaut and Precious Okoyomon investigate the presumptive supremacy of human intellect within the perennial logic of the natural world through works constructed from blood, clay, brass, powdered rock, raw wool and other natural materials. Thami Kiti, Penny Siopis, Moshekwa Langa and Serge Alain Nitegeka – working too in two and three dimensions – further examine the ability of inanimate forms to communicate, whether as portraits by proxy or extensions of personhood.

Large-scale installations by Paulo Nazareth and Jane Alexander use oblique means to address the political weight of shared space and history. Alexander’s Infirmary was initially developed as a site-specific installation, native to Erf 81 in Cape Town, a retired ammunition depot that was built by the British military in 1891. The space has since been declared a provincial heritage site, now functioning as an eco-village and foster home for people and animals. Known colloquially as Tamboerskloof Farm, its residents face gentrification by way of ongoing threats of eviction. In Alexander’s Infirmary, hybrid, paraplegic forms converse with figures alluding to state, liturgical and commercial authority; through mien and gesture, each character makes allusions to the different ways power is embodied. 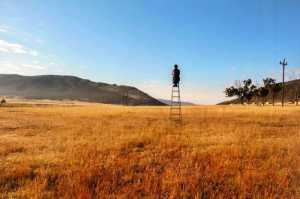 Nazareth spotlights the fissures between nourishment and extinction in MAZE, using black and white species of corn. The origin of the former is traced back to the Aztecs, and is widely used across South America where it features in the region’s folklore. The latter is said to have been introduced to South America from its origin in Mexico, spreading globally through trade and colonialism. The crop was also favoured for its ability to sustain enslaved people as they were being transported between continents. These points of analysis find resonance in a new painting by Natasja Kensmil that directly addresses the Dutch East India Company’s exploits in the Cape of Good Hope.

Photography by Ajamu X and a new work on powdered steel by Simon Gush engage with the politicisation of the living, loving and labouring body, while Kaylin Moonsamy’s mixed-media portrayal of the goddess Kali seeks to combat the erasure of non-normative belief systems in racialised modernity. Untitled, an early drawing by Ernest Mancoba, is featured as a refrain and reminder of the possibilities of transcendence.

What: my whole body changed into something else

Where: STEVENSON Cape Town and Johannesburg | July until 3 September 2021 | Viewings by appointment