After challenges that would have daunted the most intrepid, Nina Schumann has relaunched her career as a solo pianist. It’s set to be a great year ahead, says SHIRLEY DE KOCK GUELLER: 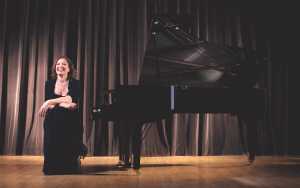 After challenges that would have daunted the most intrepid, Nina Schumann has relaunched her career as a solo pianist and is, as she says, “swimming with the sharks.“ Ms Schumann, who is one of South Africa’s foremost pianists, is performing a recital for the Richard Wagner Society on Sunday, 23 February 2020, and playing Rachmaninov Piano Concerto No. 2  with the Cape Town Philharmonic on 3 September 2020, the day after her 50th birthday.  In between she will be caring for her “third child“, the Stellenbosch International Chamber Music Festival (SICMF) she co-founded in 2004.

The challenges have been met with single-mindedness.

“Given that I was diagnosed with Parkinson’s disease three years ago, and also following a bout with breast cancer, I am just happy to be able to play.  Dealing with the diagnoses was not easy: in many respects it is so much more personal than the breast cancer, because Parkinson’s causes stiffness in movement and that has real impact on my performing career.  But I think, with the help of medication of course, I have now found a space where I can choose repertoire wisely and still enjoy performing.  This year seems to turn out to be a return to solo life!  Over the last few years I mainly performed two piano concerts with Luis Magalhaes in the TwoPianists duo, but the stars have lined up to make me take the challenge of solo performances.  I feel like I’m swimming with the sharks but it is also extremely exciting to rediscover myself and my own playing ,” she says.

Nina Schumann never doubted she would be a musician. “It was just something that felt like a given.  I started violin at the age of two and piano three years later. My four sisters and I all played at least two instruments.  My mother was the main catalyst and she ran a tight ship in terms of practising schedules and lessons. We gave a number of concerts as a family, something I absolutely adored.  My biggest barometer was my pianist sister Ilse (who died three years ago) who played the Kabalevsky Youth Concerto with the then CAPAB orchestra at age 13.  The flowers she received, the media attention, the big dress – I couldn’t wait to have my own turn!  Ultimately three out of the five sisters became professional musicians – Ilse, Mariette, a violinist, and me.“

About her own two children, the career path is not so clear.

“My children are an immense part of my life and I revel every day in the conversations we have and discovering their personalities.  Antonio (12) studied piano and cello until last year when he finally convinced us it was a complete waste of time. My daughter Lia (10) is a complete natural and very gifted.  However, we have never put pressure on them and Lia could definitely do with more practice!  I think I made the choice to be their mother and not their teacher …“

Ms Schumann, a Yamaha International Artist since 2014, made her debut with the CAPAB orchestra at the age of 15.  She has won all the major South African prizes and scholarships and several internationally, given over 140 concerto performances with orchestras in South Africa, Germany, Portugal, Scotland, Armenia and the United States and has some 40 concertos in her repertoire. She competed her BMus at UCT, her MMus at the University of California in Los Angeles and her doctorate,  which she began at the University of North Texas under the tutelage of Van Cliburn-winner, Vladimir Viardo, she concluded at UCT following her appointment as Associate Professor and Head of Piano at the University of Stellenbosch in 1999. She also co-founded TwoPianists Records with former husband Luis Magalhaes. 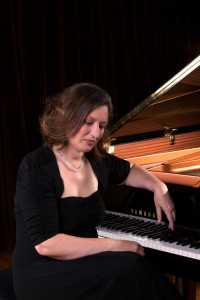 She points to the much loved American pianist, Lamar Crowson, who settled in Cape Town as her greatest musical influence.

“I studied with him for 11 years and he always had more to say!  He taught me how to uncover the music, using basic musical principles.  Without this training I would never have been able to understand the subsequent tuition I received from Russian school teacher, Vitaly Margulis and Vladimir Viardo.“

You might be surprised to hear that this accomplished pianist doesn‘t like the sound of the piano much.

“When I listen to music it is normally string playing.  So I feel like I have tried my whole life to make the piano sound like a voice or a string instrument.  I have a semi obsession with sound and over the years my playing has changed to reflect this obsession. The principle is really simple – one practices to be able to get the sound that reflects what you hear in yourself.  To achieve it is very hard though.”

“I have a very full studio at the University of Stellenbosch and I adore my students.  I am also extremely invested in them so I put a lot of focus on my time with them. But as every mother will tell you it’s all about being structured and organised.  So far my kids and students are happy which in turn gives me the greatest of pleasure.  Then there’s SICMF … CPO principal cellist and SICMF director Peter Martens correctly called SICMF my third child. It is a project I love and that inspires me, not only for the shared magical musical moments but also the immense impact it has had on so many young musicians. These are the 10 days of the year when I am the happiest.”

Where and when:  Hauskonzert in Sea Point on Sunday, 23 February 2020 at 6.30pm the Wagner Society AGM