As with Marquez and Love in the Time of Cholera, things are not perfect, but good things can come out writes PETA STEWART.

The Cape Town Philharmonic Orchestra is reinforcing that local is lekker. It is proving the adage that the import is not necessarily better than the local, and their soloists in the last, current and future season are South Africans living in Cape Town. The season began streaming on 25 March, and runs through to 19 April 19, 2021

And still more good news … Nina Schumann was booked to perform the Rachmaninov Piano Concerto No. 2 last August, 2020. We all know what happened. Then she was to perform in March. Lockdown came back. Finally, and hopefully, she will perform it in April at the City Hall, which is coming out of a huge renovation at the beginning of April, so teething problems should be ironed out.

The CPO hopes to open the concert (which is being filmed) and the dress rehearsal, but that does depend on the arrival of a third wave – so they’re holding thumbs. The other concert planned for April is with baritone William Berger singing Mahler’s Rückert-lieder. 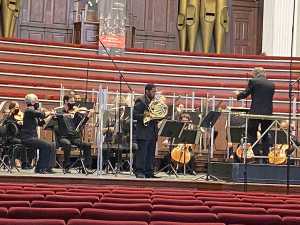 The art of flexibility

But to survive lockdowns, partial lockdowns and audience restrictions, an orchestra needs a new range of tools, all centred around flexibility.

This is not the kind of flexibility that makes the Cape Town Philharmonic Orchestra the busiest in the country with symphonies, operas,  ballet, musicals,  schools and community concerts and so on, but the kind that makes it possible to adapt to anything thrown its way, and often at the last minute … like changing schedules.

Take March, for instance. Working schedules were updated eight times after the original was finalized. That might not sound too bad until you realize that each of those updated schedules had to be issued, according to the musicians’ contracts, with seven days’ notice for the changes to be accepted.

As for the changes, these were often radical – a change of date, plus a change of venue when Artscape couldn’t honour a booking because of its own changing requirements for its 50-year celebrations was one.  The final concert in the Summer Cyber Symphony Series took place, instead of at Artscape in the week, over a weekend at the Hugo Lambrechts Music Centre, with a small audience too.

When Covid restrictions were loosened, Cape Town Opera added a performance date which meant that the CPO couldn’t honour a recital for the Cape Town Concert Series to present CPO musicians in its first concert since November.  That date has now been pushed to 24 April 24, 2021.

Cape Town City Ballet made life a little easier when it was decided that its ballet season would be to recorded tape and not to live orchestra; and the City Council’s postponement of Under the African Sky, a concert planned to show the world the city is open for business, helped, but late cancellations meant the orchestra couldn’t make last minute plans to use its time productively.

But that respite didn’t last long – the Artscape recordings took up much of the slack and rehearsals for Hansel und Gretel seemed to expand.

The need for flexibility has also applied to the dissemination of music parts. It’s the librarian’s role to ensure all musicians have all the right parts, usually left in folders in the orchestra rehearsal room for them. When that’s not possible, they may be scanned and emailed, but lack of printers and even data for some young ad hocs often made this a problem. Also, if as in the current opera where there are single not double wind instruments, illness of one member impacts on all, and a new part is suddenly an urgent requirement.

Compassion may be a normal need, but it has been severely tested during this time when several board members, management and musicians got Covid, were hospitalised, died or lost a family member.

Compassion for the ad hoc teachers and young people in the educational projects reached sadly really high levels when one young student took his own life, a teacher and her husband were robbed of all the electronics in their home, and another teacher was robbed of his laptop just after exiting the orchestra’s branded vehicle after being dropped home in Khayelitsha. As another severely financially impacted ad hoc teacher said, “Since lockdown the mood in Khayelitsha has grown sinister through sheer desperation”. 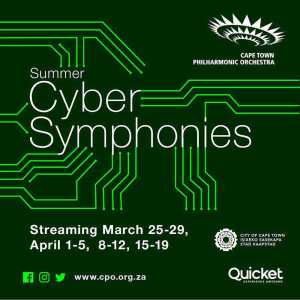 Another need is extended patience. One of assistant manager Milena Toma’s roles is to engage ad hoc players where necessary. For a symphony concert that changes date and venue, it means she has to cancel, re-engage or substitute when the original ad hoc musicians are unable to accept the new dates – weekdays mean students are at school or university, and musicians who teach privately.

Even a change of one hour requires a what’s app group message to the core orchestra and individual ones to the ad hocs.  She also has to often field angry questions of ‘to mask or not to mask’.  Of course, masks, for all except the wind players and the conductor have a choice with the agreement of the musicians – a mask, or no mask if he was behind his screen and away from the players.  No one would dispute that conducting can be equated to a sportsman’s exertion!

Twice, with the orchestra’s Man Friday, Derrick Wildeman and Artscape crew, Milena was down in the Opera House pit measuring exactly how many musicians, protective screens and timpani, could fit, even for a reduced opera score under current restrictions. Please, sir, could they have more? No! It also fell to her to buy a blanket so that the conductor’s new protective screen didn’t get scratched. Being bigger than the other screens made by deputy concert master Philip Martens and some of his colleagues, it doesn’t fit into the box he made for the rest of the screens.

Another question: Would there be air-con in the pit? There wasn’t, then there was!

Then there is money … nothing to add here, but as with all the arts, thanks to national government’s ineptitude, the orchestra is suffering despite slashed budgets and reduced salaries and the CPO remain grateful to all donors and also to those who top up on the Quicket site when booking. Of course, the CPO is grateful to those who buy tickets for its online concerts. Filming of concerts is a complex and expensive production, but to date the filming has received high accolades.

A last word: There’s a new kid on the block …  the Mother City Orchestra, which is scheduled to play light concerts in the countryside in April and hopefully give much-needed paid work to young musicians. “Good luck guys as you embark on your steep learning curve,” says the CPO. Faced as everyone is with a lack of support from national government and corporate support, there’s no doubt that all must make serious music survive.