When it comes to crunch, Richard Pryor digs deep. With the guitarist at the helm of the supercharged Pebbleman ensemble, this cooking Cape Town band keeps delivering with awesome chops all round writes JANE MAYNE.

With the release of their third album, SUPERFIED, on 1 September 2021, fans once again get to relish the Pebbleman experience after an enforced break from the bandstand.

Turned up loud, this 10-track collection is almost like a live gig. At the core it features Jesse Jordan showcasing that phenomenal voice which could easily front any of the world’s top rock acts. There’s no denying that Jesse is one of South Africa’s best rock voices to ever have emerged from the country. 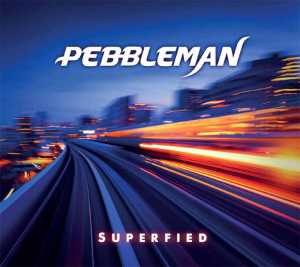 Uber-bassist Rob Stemmet is always a pleasure to see and hear, and here he wields his Warrick with all those in-the-pocket grooves he’s become known for. Drummer Kevin Gibson powers the band with focused stickwork. He’s a master technician that underpins the project with percussive intricacies that keep propelling it forward.

But ultimately, it’s Richard Pryor that ignites the flame. There’s a gravitas to this uber-guitarist’s fretwork that ticks all the boxes. His melodic riffs combine just the right amount of emotive depth, classic references and flurries of licks to garner huge respect. From sensitive sustain to hard shredding crunch, this axeman’s playing is appealingly nuanced.

SUPERFIED was recorded against all odds during a heavy Covid lockdown and just before singer Jesse Jordan emigrated to the UK. “I’m ecstatic to finally have it all captured on ‘tape’ as a document of my original music of the last five years. Actually, I feel this is the best album I have ever done, and very happy with the final audio production, which we put a lot of work into,” says Richard.

“We recorded in Cape Town central with engineer Floris le Roux, and he did an astounding job on recording, mixing and mastering this album.”

“I think my songwriting has matured a lot, and this album is more about the songs than my guitar playing. I believe Jesse delivered his strongest and best vocal performance to date – absolutely mind-blowing without a single auto tune,” he adds.

“Kevin Gibson also gave his absolute best and I don’t think there are any other rock ‘n roll recordings of Kevin playing and sounding quite like this. His attention to detail to the music genre is absolutely spot on.”

“Rob Stemmett on bass really nailed down the meat and potatoes, and I also feel this is his best offering to date. I also brought in Morne Toua on keyboards to help fatten things up and add emotional depth to the tracks. He did that in spades.”

“There is some cinematic drama to the song order on this album. The first track, Searching, opens with a crack of thunder (a birth) and the song jumps out at you – trying to find the meaning of life, trying to find answers, but soon realizing that they will never be found.

Then it simmers down a bit on track five with Edge of Nails, which is symbolic of having that ‘on edge’ feeling, being dissatisfied or even self-loathsome. The human condition of edginess and discontent rings strong here. The album ends off with the indulgent Set Me Free. There’s a chaotic guitar and drum jam that starts from about 6 minutes, and then the song ends with atmospheric sounds of the sea – symbolic of returning from whence we came. Between all of the above there is a lot of rock ‘n roll with some blues sauce to boot!”

There was a Facebook album launch on 1 September, 2021. SUPERFIED is now available on Quicket, plus as a digital download.

NOTE: Richard’s gig with Rob Stemmet, Kevin Gibson and Mark Haze at Hillcrest Quarry on 19 September, 2021 has been postponed. Tune in for the next one.