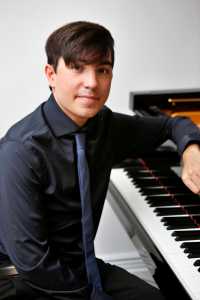 When he lived here, pianist Leo Gevisser caused a stir, winning at the age of 12 First Prize at the National Atterbury Piano Competition, soon followed by the gold medal at the Hubert van Der Spuy National Music Competition.  When he went to Cleveland at the age of 14, he continued causing a stir, winning soon after his arrival there both the Cleveland Institute of Music  Preparatory Concerto Competition as well as the Cleveland Suburban Symphony Young Soloists Concerto Competition and in 2019 both the  Grand Prize at the Baltimore International Festival Competition and the  6th Coltman Chamber Music Competition (for the Arcus Trio); next step was to be accepted by the Juilliard to study with Jerome Lowenthal and he has just completed his second year there.

Leo is back in South Africa not only to open the Cape Town Philharmonic Orchestra’s Winter Symphonies at the City Hall season on June 2 2022 with his interpretation of the Fourth Piano Concerto by Rachmaninov with Bernhard Gueller on the podium but to perform with the KZN Philharmonic ((June 9 Saint-Saens Piano concerto no 5 with Daniel Boico), where he made his orchestral debut in 2014 as part National Youth Concerto Competition; and the Johannesburg Philharmonic (June 23 Rachmaninov with Gueller).

Then it is off to the UK to spend “quality” time with his parents and younger brother who moved there from Cleveland last year, participate in a Pianofest in The Hamptons in New York state, and then return to SA in August or a series of recitals in Stellenbosch, Johannesburg, Bloemfontein, Hermanus, Knysna, Makhanda (Grahamstown), and Gqeberha.

He is not only a talented young man but one who has been raised with the best values possible and he is aware that while he has had many opportunities there are many talented musicians who do not have this.  He is following through on a policy he established in 2016 to donate time and all or a portion of  fees to the Masidlale Grassroots Projects the CPO has been running for 15 years teaching disadvantaged children from the townships, the city and up the west coast how to play an instrument.  This tour is no different, and Masidlale will benefit from his largesse with a portion of fees from all concerts and recitals donated to the young musicians some as young as seven.

“All musicians should have the opportunity to perform at any stage of their development. In many cases, passion for music is developed through performing. The Masidlale children come from backgrounds where opportunities to learn a musical instrument are little to none. To give these children the support they need to kindle their passion for music by learning their instruments and performing is both humbling and necessary.”

Leo took his first piano lessons at the age of five when he was at Bishops Preparatory School in Cape Town; Nina Schumann and Luis Magalhães took over when he was ten.    He says that he was already interested in classical music when he was bout three, listening to CDs of Bach and Mozart’s music.

“However, one musical influence that came a few years afterwards was my fascination with Grieg’s Lyric Pieces. The first recording that I remember listening to and falling in love with is Emil Gilels’s interpretation was on the Deutsche Grammophon label. Eventually, I started sight-reading through a book of those pieces, beginning a journey of discovery with other works for piano.”

Started at a young age

His parents picked up on his passion when he was three, and he started at five with piano, violin and recorder, “but the instrument I have found the most personal to me is the piano. Performing is one of the most essential parts of being a musician, so there hasn’t been one moment where I didn’t express the urge to perform in any environment – professional, casual, or otherwise.”

Leo was soon noticed in his home country.  As far back as 2015 when he was 12 he began to perform with the CPO, first the a movement of  Ravel Piano Concerto Movement at what is now the Youth Classical Music Concert at Artscape, and the next year he was one of three young soloists paired with three contenders to be crowned the overall winner in the third Len Van Zyl Conductors’ Competition, now the SA Conductors’ Competition.

“Those performances I will always cherish as I never could have dreamed to perform with such a wonderful orchestra. The COVID-19 pandemic has impacted performing musicians in expressing musically what they have to say, hindering performance opportunities as recitalists or soloists with orchestras. So, to revisit this orchestra after six years will be an opportunity that means more to me in the present day than it has ever before.”

A mature young man, Leo ascribes this to the fact that he has missed his family “terribly over the past year. As a result, I have had to gain a considerable amount of independence as a performing musician. This independence is both freeing and daunting – where I have the freedom to choose my own path, but the only person I can rely on in an opportunistic place such as NYC is myself.”

Leo is captivated by the process of discovering more works in the piano repertoire, as well as performing. “These  are aspects of music that invigorate me. For me: meticulous, meditative practice sessions with the piano allow for this element of discovery to blossom forth and vitalize my mind and soul. I also improvise a lot as a way to discover more with the instrument and as a means to initiating practice sessions.”

But he is not always locked in with his piano, although when he had Covid and was in quarantine  in a New York hotel  he had an imaginary keyboard so he could focus on the theoretical rather than the practical.  He was glad to leave though,  able to get back to a real piano, walks in the park and scout out NYC restaurants for he confesses to becoming an avid foodie.  “If you ever need assistance in finding restaurants around the NYC area, I would be happy to help!”

He does miss the parks, forests and nature reserves of his home country for that is where he get most of his inspiration. Central Park has to be a major alternative!  for what I do. I am also becoming an avid foodie!

In Cape Town and Johannesburg, he is looking forward to performing the Fourth Rachmaninov Piano Concerto.

“The first time I came across it was only a couple of years ago, through listening to Rachmaninov’s own recording of the piece with the Philadelphia Orchestra under Eugene Ormandy. Given how rarely it is played nowadays in contrast to his 2nd and 3rd concerti, it was one of those hidden musical gems that I couldn’t shy away from. This work is Rachmaninov’s spirit in full flow, and learning the work over these months has been a true joy.”

Feet firmly on the ground

Still so young, Leo’s feet are firmly on the ground and his long term goal is simple. “I want to perform and create music as much as I can!”

And he will. Says Antonio Pompa Baldi, “Leo arrived in Cleveland already playing very well, showing plenty of talent and potential. I’d say he is more than fulfilling that potential. I loved having Leo at my festival in Italy, Todi International Music Masters, where he performed beautifully in solo recital and with orchestra. He certainly has a bright future!”

It’s a mutual admiration society. “What a wonderful artist! Hs playing was incredibly moving. I also had the privilege to study with him in his festival in Todi, Italy in 2018 – which was a wonderful experience! “

As Nina Schumann sums up, “Leo is one of the brightest stars I’ve ever had the privilege of teaching. Even at the age of 10 one could feel how deeply he felt music and one had the sense that it was just a short amount of time before his technical growth would match his musical talent. I am so happy he has returned to South Africa and I am even more ecstatic it is with the Fourth Rachmaninov Piano Concerto.”

Although he has many friends in Cleveland, it’s still Cape Town he considers home.

“Most of my family are in South Africa, and Cape Town is the place where I spent the majority of my childhood. The people, scenery, friends and family, and memories I hold in this city is why I still consider Cape Town my home.”