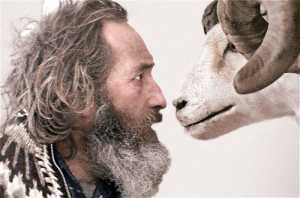 I went to the Labia last night, on my laptop. I chose which movie I wanted to see, paid my R60 and settled in at home to watch Rams, and it was wonderful. Seeing an arthouse movie that I missed before was exactly what I needed, and the only thing I missed was the popcorn in a bag. Next time I will be better prepared.

Now for the movie itself. Nothing in the blurb quite prepared me for this totally odd, very funny, but mostly deeply unnerving film. As its title suggests, it is a movie about sheep. And two brothers who haven’t spoken to each other for 30 years. And it is set in rural Iceland. And it has the most unexpected ending of any movie I have ever seen.

I love it when movies show us a remote and unusual location, here on earth. This part of Iceland; with few people, freezing, snowy winters, and weird sheep is something I have never seen before. Match this strange and otherworldly environment with a brotherly feud that reaches a climax because of sheep, and you have the strangest movie ever.

Kiddi and Gummi, the two brothers, are competitive sheep farmers, who live alongside each other but do not speak. Gummi sends Kiddi written messages via Kiddi’s sheepdog. Then something goes terribly wrong, to up the conflict even more.

I have no idea whether the performances are brilliant, whether these are professional actors or real people, whether what they say is what is translated in the subtitles. I have no idea. But this is a beautiful, funny and terribly sad film that left me feeling both touched and disturbed and I can’t stop thinking about it.

Rams was my first choice, but I am probably going to work my way through the list of movies the Labia has on offer. It is proper soul and mind food and it makes a change from the endless Netflix scrolling.