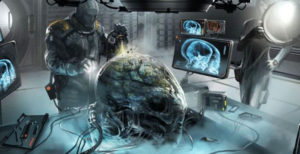 Splendid visual effects and plenty of nostalgia makes this latest Alien prequel an action-filled space horror which is sharper than its immediate predecessor.

Since it doesn’t have to explain what people are doing out in space, Alien: Covenant starts by plopping us onto a starship transporting sleeping colonists bound for a remote planet.

The crew decide to investigate an uncharted planet which could be a better fit, but we know from the film title what they will find.

Clearly no Covenant ship crew members are horror film fans, so far into our future. When they start exploring they go TOWARDS the creepy looking pods, and stand in the middle of empty spaces, waiting to be attacked by fast-moving creatures they can barely make out.

Like with Prometheus, Covenant takes place on a planet rather than in outer space. While this opens up Ridley’s scope for world-building – which the artists and designers do full justice to – it changes the atmosphere.

The tagline of the first film, “in space no-one can hear you scream”, should have been accompanied by “and there is nowhere to run on a spacecraft”. The very claustrophobic nature of the spacecraft helped heighten the sense of horror, especially since you didn’t even see the creature for a good part of the movie.  You just heard a whole lot of terrified, anxiety-inducing breathing.

Hurtling from scare to scare

Once the creatures start gestating we hurtle from one scare to the next, though director Ridley Scott goes for short sharp bursts of dread, rather than a slow burn as he whittles down the crew.

The face-huggers and the chestbursters put in an appearance and there are a myriad of grotesque creatures who kill in a variety of gory ways. But the scariest creature turns out not to be the very animalistic neomorph (the pale creature from the trailers).

Where Alien (1979) betrayed our fear of corporations taking over every aspect of our lives, it seems our biggest bogeyman is now the life we are creating the closer we get to making AI a reality.

David (Fassbender) from the first film is mirrored by Walter (also Fassbender) the synthetic crew member of Covenant, who proves to be even more human by being less empathetic than his older brother.

Fassbender creates two distinct characters who ponder the existential questions the crew are to busy dodging aliens to ask.

The film’s storyline creates new questions to add to the Prometheus’ plotholes, all the while continuing the “what is life and who made us” theme started in the previous film.

Watching the extras on the Prometheus DVD and the two Covenant prologue short films online fill in some of the gaps, but this is a film which gets better as you talk about it with fellow fans, rather than necessarily when you watch it. Mostly because you inadvertently close your eyes or duck behind the chair every time a new creature pops up to scare the bejesus out of you.