While the Arthur legend may be familiar to many, this version of the story is about things happening to get the Arthur character (Charlie Hunnam sports an English accent that waxes and wanes, but he commits to the action wholeheartedly) from one fight to the next.

This is not about telling the story behind the legend (as Jerry Bruckheimer attempted to do with King Arthur), or being faithful to Malory’s Le Morte d’Arthur (Knights of the Round Table), or exploring the Guinevere/Lancelot/Arthur love triangle (First Knight – Richard Gere is the reason to watch this one…). 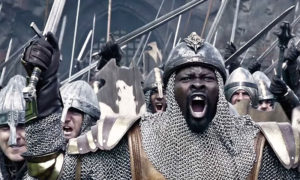 You don’t ever care…

This is about getting Arthur to the throne and it is nowhere near as cute as Disney’s animated and underrated The Sword in the Stone.

While Ritchie’s Arthur grows up on the means streets of Londinium his uncle Vortigen (Jude Law plays the bad guy like a misunderstood hero who just wants his due power) rules with an iron fist.

When Arthur puts in an appearance he becomes a lodestone for the disaffected people of England. He also attracts the attention of the mages in hiding, but don’t expect to see Merlin.

This street smart Arthur doesn’t want power, he fights to save his friends, and it is fun trying to figure out who will end up at the round table.

While the 3D screen on the V&A Waterfront was badly lit as usual, what I could make out of the CGI was intriguing, especially the origin of the rock in which Excalibur languishes for years while Arthur grows up. It may be sub-titled Legend of the Sword, but the weapon’s power is never really explored though.

Anachronistic speech patterns make it easy to understand what people are saying, and there are some funny lines, but the lack of emotion just means you don’t ever care.

With its rapid-fire editing and literally explosive action it appeals to anyone looking to be momentarily entertained on the big screen. Just don’t expect the surreal exploration of the concept of myth (Monty Python and the Holy Grail) or a heady brew of myth and magic (Excalibar). This is an action set piece of the swords and sorcery variety.